Researchers have published 4 new papers this year showing that both tropical cyclone activity and intensity have declined over the past decades. The findings mean atmospheric scientists and policymakers will need to reassess positions on climate change and tropical storms.

Last year’s 2017 hurricane season was an active one and caused a great deal of damage along the US southeast coastline. Global warming alarmists moved quickly to blame it on man-made CO2, which they say causes the planet to warm up and thus makes tropical cyclones more frequent and ferocious.

Yet an objective analysis of the recorded data show this is not the case at all, and that the opposite is occurring.

For example, new scientific results of an analysis authored by Ryan Truchelut and Erica Staeling in the journal Geophysical Research Letters tell us that the 11 years before 2017 were in reality “an extended period” of quiet continental United States tropical cyclone landfall activity that today is known as the “landfall drought”. During this period (from 2006 through 2016) no major (category 3 or higher) hurricanes made landfall – an unprecedented event since systematic observations began.

Activity over 40% below average

The data also revealed a “statistically significant downward” trend since 1950, with the percentage of total Atlantic ACE expended over the continental U.S. at a series minimum during the recent drought period.

US landfalling hurricanes downward trend since 1900

Another just released scientific study by Klotzbach et al., 2018 tells us that since 1900 neither continental United States landfalling hurricane frequency nor intensity show significant trends (including the devastating 2017 season). 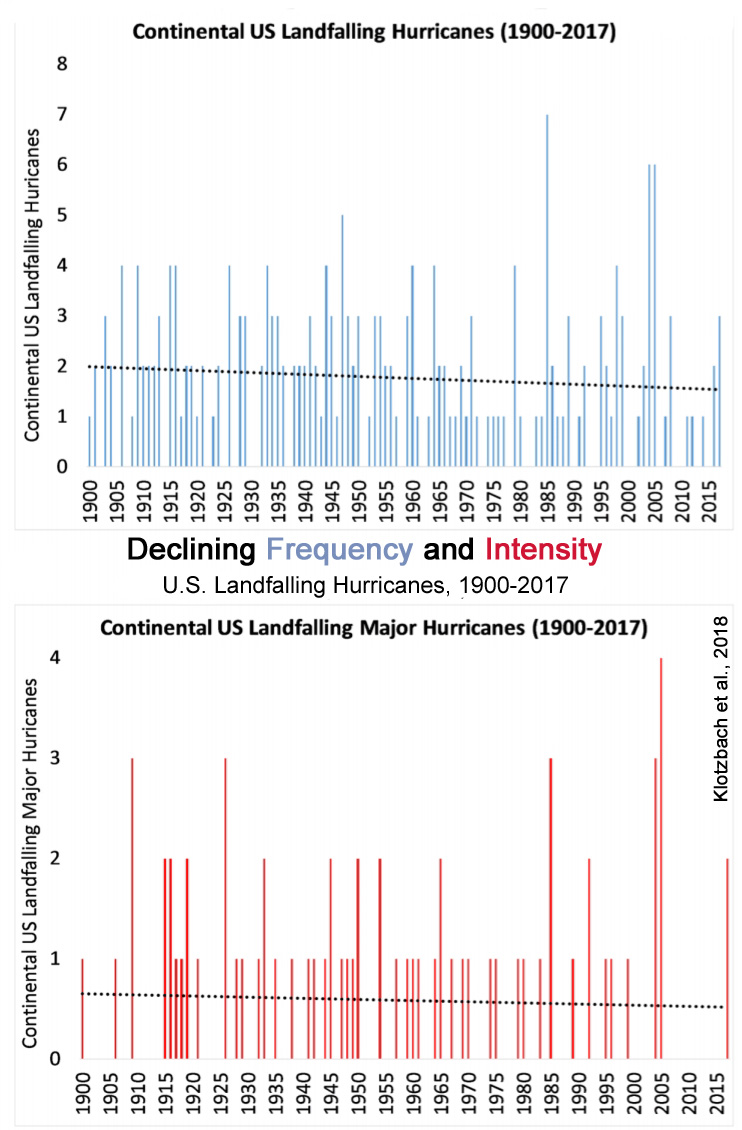 Charts above show that continental US hurricane activity has been decreasing since 1900 (despite atmospheric CO2 and global temperature rising). Source: Klotzbach et al, 2018.

A third scientific publication authored by Zhang et al., 2018, also appearing in the journal Geophysical Research letters found that the mean frequency of Western North Pacific (WNP) tropical cyclones was about 18% lower over the 1997–2014 period compared to the previous 1980–1996 period.

The reason, the authors found, was in part connected to “enhanced sea surface temperature (SST) warming in the North Atlantic”!

“No significant correlation” between cyclones and temperature

Finally a fourth scientific publication by Zhao et al., 2018 looked at the relationship between increasing tropical cyclone activity and increasing sea surface temperatures. Three previous studies by Liu and Chan 2013, Lin and Chan 2015, and Zhao and Wang 2016 showed that there had been a significant decrease of tropical cyclone frequency over the Western North Pacific basin since 1998.

According to Zhao, citing Chan 2006 and Yeh et al. 2010, observational analyses pointed out that there is no significant correlation between tropical cyclone frequency and sea surface temperatures over the Western North Pacific basin. 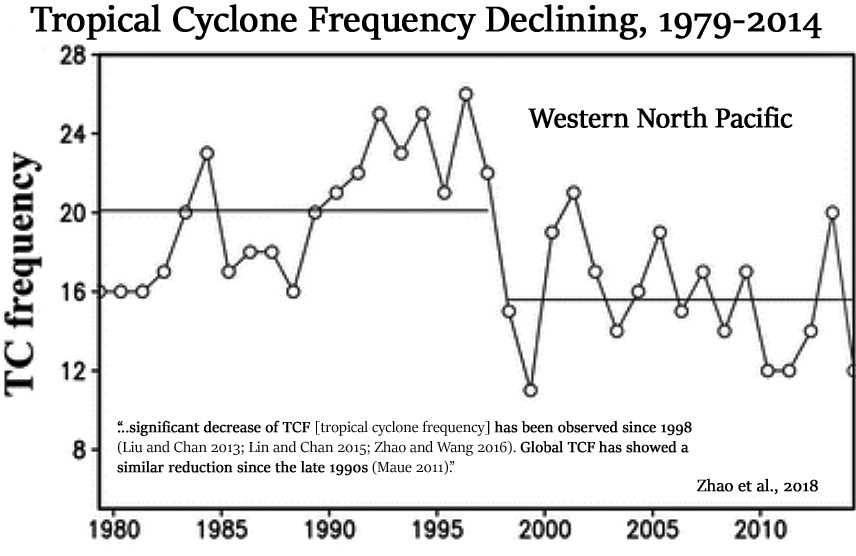 Moreover, the chart above makes it clear that tropical cyclone frequency in the Western North Pacific basin has in fact been declining.