Indeed here in Germany the media have stepped up the dramatic reporting in the wake of Deutsche Welle’s international conference on journalism and climate, reported here: Journalism for Dummkopfs.Driving home yesterday I heard a report on publicly funded German NDR News radio, asking a climate expert (paraphrasing):

NDR went on to mention the weather anomalies in Moscow, Pakistan, China and the local floods in the eastern part of Germany, and emphasized all the death and destruction along with it (They forgot to mention the severe cold in South America). Fortunately, the data tells the opposite story.

Cyclones and storms near all-time lows

Yet anyone taking a closer look will see that all the extraordinary drama is confined to the newsrooms, and is not what’s going on outside.  The latest tropical cyclone energy index shows that cyclones are near all-time lows. Where are all the big cyclones we were told would be coming in the wake of Katrina? 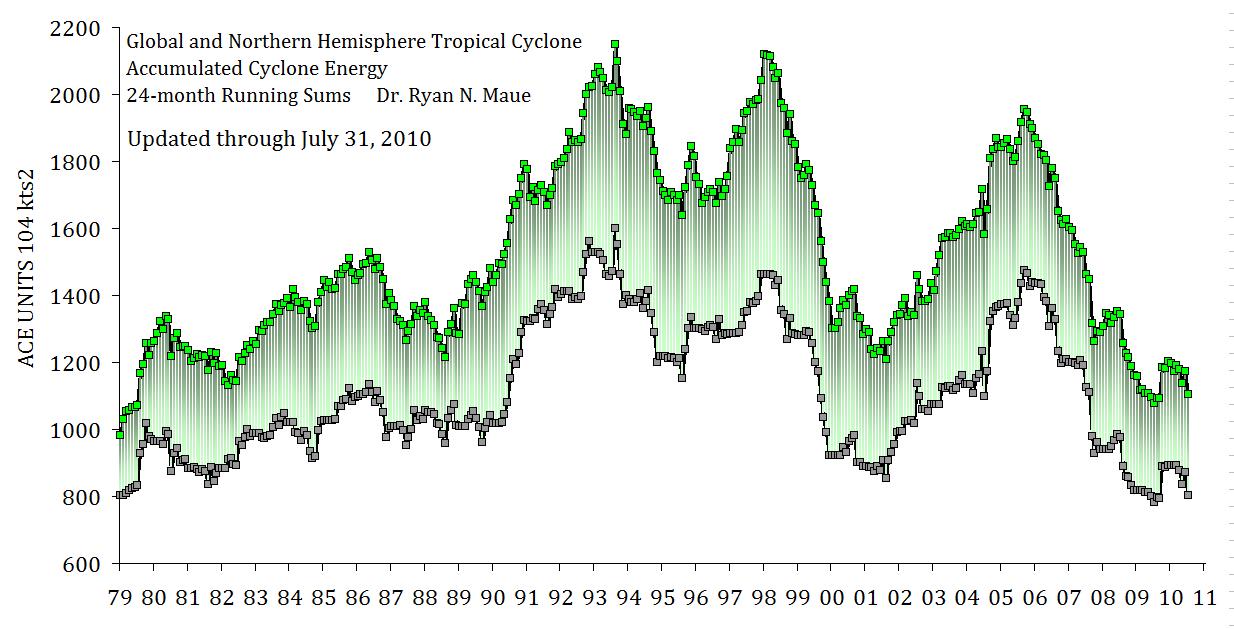 Nasty weather extremes have always occurred, and there are no statistics to show they’ve picked up. The number of deaths resulting from weather and natural disasters is also declining. There are many factors involved here, but the sky fell more often back then than today.

No upward trend in storms and bad weather since 1850

What about tornados in the USA? The following graphic also shows a downward trend. http://www.oism.org/pproject/s33p36.htm

The worst happened in the past

Indeed looking at the top 10 weather catsatrophes in the USA, the worst ones happened long ago. See Live Science here.

But let’s not focus only on the USA, where statistics are easy to get. Let’s look at other parts of the world. Now here’s a graphic (sorry about the quality) showing cyclone activity in the bay of Bengal and Arabian Sea from 1890 until 2000. Looks downward to me. Here the vertical axis shows the annual frequency of cyclones and the x-axis shows the year. The dark line is the 10-year moving average.

Fewer people than ever are dying from weather extremes

And what about deaths globally? With all the bad climate change and growing populations, you’d think people would be getting killed on a massive scale. The following graphic shows the opposite is true.

All the panic is in the newsrooms

So why do some believe that extreme weather events are occurring more often than ever and that more people are dying and suffering? This is because the media stories have increased dramatically over the years, as they report on every Tiny Tim storm out there as if it were a Cat 5.  It’s overhyped.

The above graphic shows the number of newspaper reports about climate change, which is often cited as the reason for every weather anomaly happening out there. Fortunately, things on this big blue planet of ours have been quieter weatherwise, and people have caught on with respect to what all the media hype is about.

All the commotion is coming from the over-agitated folks in the newrooms.