Is paranoia contagious? It seems so in certain circles. Like fear, it begins with one, and then spreads like wildfire.

Yesterday I wrote about Professor Stefan Rahmstorf’s hissing and fitting reaction to a piece written by EIKE, the humble sceptic organisation that had the audacity to bring up one of Rahmstorf’s old, yet embarrassing papers here, which I wrote about here.

Something is really getting to the poor fella. Science is supposed to be for the calm, and not the irrational. Rahmstorf has to learn to get a grip.

It seems whenever someone expresses dissent, which is normal in science, Rahmstorf flies off the handle and lashes out, almost irrationally.

Yesterday, for example, Roger Pielke Jr. wrote a piece here with details on an e-mail exchange between Rahmstorf’s sidekick Michael Mann and journalist Daniel Greenberg. These guys really seem to think the whole world is out to get them.

And recall the paranoia that pervaded throughout the Climategate e-mails involving Jones, Mann and the rest of the cast.

In this post I’m only going to focus primarily on Rahmstorf, as he is the issue here in Germany at the moment. But it fundamentally applies to the rest of his team as well.

Firstly, Rahmstorf is one of the very few “climate scientists” who truly believes that sea levels are about to rise at alarming rates over the next few decades, even refusing to accept the much more moderate projections of the IPCC, for which he is a lead author. Even though there is no data out there to support it, Rahmstorf is sure the atmosphere and seas are out to get us.

Calmer minds have attempted on numerous occasions to alleviate his anxiety by pointing out that scientific data do not support his horror visions, and that there is no need to go sleepless about it. For example sea levels over the last 100 years have risen at their normal rate of about 20 cm per century. Over the last years sea level rise has even slowed down, Read more here: Going Down. 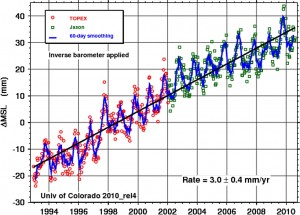 Sea level rise is slowing. TOPEX U. of Colorado

And when someones tries to explain to him that the Greenland ice cores provide a reasonable temperature reconstruction of the past for the globe, he refuses to believe that too, insisting the fluctuations were local and not global. And if someone shows him that multiple proxies from all over the globe also show that temperatures fluctuated naturally, corresponding with the Greenland ice core, Rahmstorf still refuses to believe it and insists the climate is coming for us.

Proxies from all over the world confirm fluctuations on a global scale.

So why does Rahmstorf refuse to believe data and the fellow scientists who deliver them? Here he also believes that these scientists are paid hacks of the big carbon industries, tobacco, and ultra right-wing think tanks.

The lefty Süddeutsche Zeitung newspaper, for example, even reminded Rahmstorf awhile back that EIKE is just small, mailbox sceptic organisation. Are corporations pouring millions and millions and only getting a mailbox operation for their big bucks?

Rahmstorf is acting too paranoid, and this behaviour is now running rampant through much of the warmist side. He even thinks that European corporations are buying up US denier senators. He writes at his piece Headlines From Absurdistan, citing treehugger blog:

Also European companies don’t pinch their pennies when it comes to buying up candidates for the US Senate who deny anthropogenic climate change.

How are regular people reacting to this? Daniel Greenberg wrote to Pielke:

My sympathy to you and anyone else who has to deal with them. They’re gravediggers of science.

Relax – the climate is not going to tip and destroy the planet. The data does not show this.

16 responses to “Stefan Rahmstorf, Michael Mann – Are They Climate Paranoid?”