A recent paper by Ping Zhang and Marc Imhoff of NASA Goddard Space Flight Center (NASA materials found here), pointed out the incredible heat island around some eastern U.S. cities, including Providence, Rhode Island, and Buffalo, New York. This author decided to examine this data, and compare it to the GISSTemp data for the same location.

First, here is the image from the NASA paper, and below it, a heat map image derived from it. Note the temperature scale on the bottom of both images. The temperature scales are from 20 to 40 degrees C. Find the airport in these images. 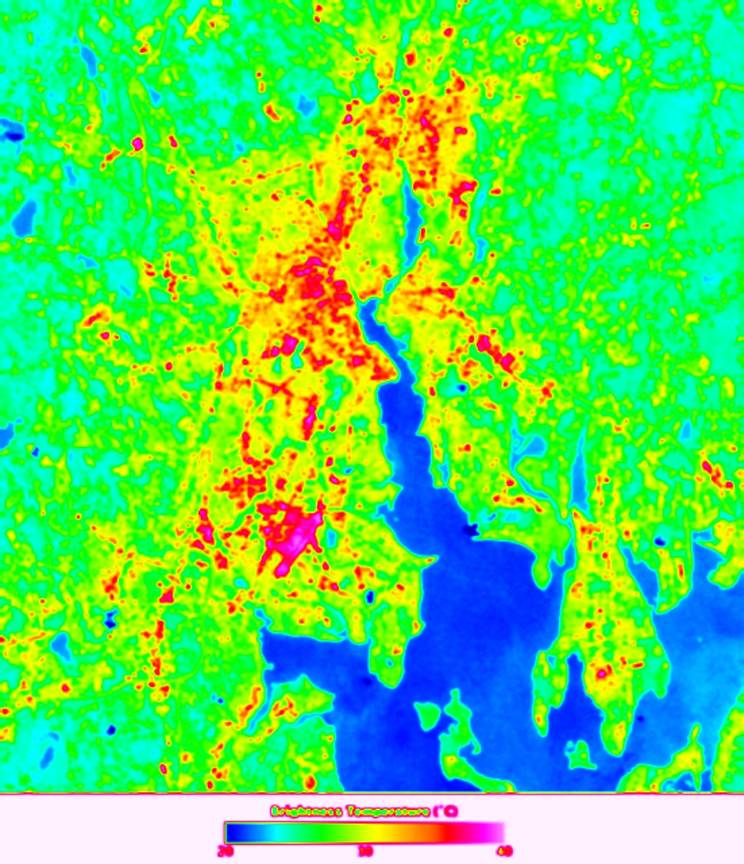 The airport should the easy to find, it is the hottest place on the map, about 15 degrees hotter than the cool countryside at the edges of the images. This is the Warwick/Providence TF Green State Airport.

Now, where do you suppose the temperature is being measured at this airport?

As at most airports, it is in between the main runway and the taxiway in front of the terminal. Right next to that purple spot on the heat image, the hottest place on the map. After all, the pilots want to know the runway temperature when they plan their landings and takeoffs.

Look at the 2 images below from the U. S. Geological Survey, and Google respectively. The weather instruments are near the navigation beacon (the dark spot, at the arrow, near the center of the USGS photo):

What does GISSTemp say about this location? There are two records in the GISS database: a raw data file, and a corrected file that they use for further processing, such as the U.S. and the global average temperature. The default file is the uncorrected raw data. The URL looks like this:

If you change the digit after the “set=” to a 2, you get the corrected data. Both sets of data are available as text files from a link below the resulting chart. Both sets of data were downloaded and charted below, along with the mathematical difference, the “correction”.

Both sets of data show a warming trend, but the uncorrected data (Providence 1) shows much more warming than Providence 2. The difference is a stepwise correction, warming the past by as much as 1.2 degrees C.

One would think that any correction should be to cool the more recent temperatures to correct for the increasing UHI, but that isn’t what they have done. And, most of the correction was done to data before 1940. This doesn’t make sense either, as most of the infrastructure and population buildup around the airport didn’t happen until WWII and after. Also, the correction amount doesn’t approach the UHI temperature rise measured by Dr Zhang.

Will Drs Hansen and Zhang get together?

Most of the surface temperature data that goes into the averages, whether world-wide, or here in the U. S., come from airports. In the U. S., the number is 121 out of 134 stations. Each of the airports in the images in the NASA paper can be clearly seen as a hot spot. Clearly, some work needs to be done to correct the surface temperature record in light of this information.

When will GISS get around to that?