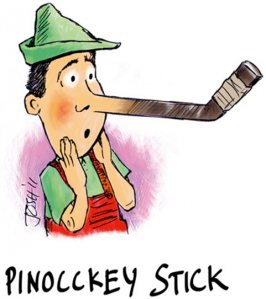 America’s Public Broadcasting Service (PBS) is keeping track each day of the number of high temperature records being set in the USA. As at 30th August they reckon the year-to-date total was up to 4779. The clear message is that “temperatures must be getting hotter”. But is this so? Are matters as simple as they appear? We need perhaps to start by looking at the methodology employed.

PBS are using data collected by the NCDC from official stations only (not volunteer stations). They go on to say: “In order to make it into our count, a recorded temperature must either tie or exceed a previously recorded temperature on that date in a previous year”. In other words they are not just recording all time highs or even highs for a particular month, just highs for that particular day. So, for instance, a heat wave that lasts 2 days could set 2 records even if the second day was not as hot.

PBS also state – “NCDC records go back for many stations as far as the mid-19th century”. To the extent that this is true, very few record low temperatures would be set given the fact that the 19th century was a particularly cold era. However, as we shall see later, this is such a misleading statement that it borders on being dishonest.

Before we look more closely at PBS’s numbers we should have a quick look at the overall temperature record for the USA in 2011. From January to July, 2011 ranks only 35th warmest in the last 100 years according to NCDC data.

However this year has perhaps been slightly unusual, with the Northwest being relatively cool and the South and East being warmer than unusual, so averages do not tell the whole story.

Out of the total of 4779 record highs so far, 718 occurred in July, a figure slightly above the average monthly figure of 597. I have broken down this July number and find that 42 record highs are in Kansas. Again this seems to be a representative sample. According to the NCDC map, Kansas July temperatures were “much above normal” but not as hot as Texas and Oklahoma, see here.

What do the 42 record temperatures for Kansas tell us when we look at them more closely? There are 20 official weather stations in Kansas of which 19 appear to be at airports. Record temperatures, however, have only been set at 8 of these. All of these 8 stations are airport based. Two of these are in Topeka and so are arguably double counted! These are listed below:

We can see immediately that the claim that “many stations go back to the 19th century” certainly does not apply to Kansas. More importantly none of these date back to the mid 1930s when July temperatures were much higher than now. (Topeka Billard is listed as starting in 1932. However the actual records start in 1948), see here.

Although none of these stations go back prior to 1939, there are earlier records available at other locations that are very close to some of these stations. These records show that in most cases higher temperatures were recorded either in 1934 or 1936. These alternate stations are typically less than 4 miles from the current station and the metadata show similar conditions such as altitude.

Out of the 23 “record highs” set at these 5 stations in 2011, 16 were lower than previous highs set before the station became operational. Only 30% were genuine highs or 1.4 per station. (It is possible of course that some of these records were also exceeded in years prior to 1934).

When we analyse the July temperature for these stations further. It is clear from this analysis, regardless of the parameters used, that July in both 1934 and 1936 were significantly hotter than July 2011.

There is one further matter to look at. What effect have airport siting or other UHI effects had on the long term temperature trend at these sites? Taking Topeka as an example, I have identified 4 other weather stations nearby which are not based at airports and are in smaller towns. They are all certified USHCN COOP stations and have continuous records dating back to 1936. Their metadata and geography are summarised below.

TOPEKA
No station changes since 1932.
Station situated 410 ft from runway
Topeka has a population of 127,000 but the airport is 4 miles out of town.

HORTON
The station is based at a water plant and has been in the same location since 1983.
Population of 2000.
Horton is 42 miles from Topeka.

PAWNEE CITY
The current station is within a mile of its site in 1936 with no significant change in altitude.
Population of 1000.
77 miles from Topeka. (Pawnee City is actually in Nebraska, but is closer to Topeka than most other comparable Kansas sites).

LAWRENCE
The current station is 2 miles from the 1936 site. Both sites are within the town.
It is also now at an altitude 145ft higher than in 1936 which will have a small effect on temperature differences.
Population is 66,000.
Lawrence is 40 miles from Topeka.

LEAVENWORTH
The current station is within 1 mile of the 1936 site and both were situated in the centre of town. As with Lawrence there has been a slight altitude increase of 80 ft.
Population is 38,000.
41 miles from Topeka.

Temperature comparisons between 1936 and 2011 show:

In other words, Topeka has become significantly warmer relative to the “rural” sites at Horton and Pawnee City. Both maximum and mean temperatures show a divergence of between 3°F and 4°F. Interestingly the medium sized towns appear to be consistent with Topeka in terms of maximum temperatures (particularly when the slightly higher altitudes are factored in), which suggests that the UHI effect in these towns is similar to the airport effect at Topeka. (As the airport is 4 miles outside town the UHI effect of Topeka’s larger size is probably not significant). There does not appear to be any logical reason, though why mean temperatures at Leavenworth and Lawrenceare relatively cooler.

So what can we conclude?

1) Over the US as a whole, 2011 has so far been barely warmer than average. In no way can it be remotely described as “hot” as implied by PBS.

2) As forKansas, July, although much warmer than average, is only the 5th warmest in recent years and 1.9F cooler than 1934.

3) The only stations in Kansas where records were set in July are all airport based and date back no earlier than 1942. Alternative stations confirm most of these “records” are lower than previously set in 1934 and 1936.

4) Where records are available back to 1934, they show that temperatures in both 1934 and 1936 were considerably higher for the month as a whole than 2011. This is true for average maximum, average mean and high maximum.

5) Comparison with rural stations suggest that airport siting and possibly UHI have had an upward effect on temperatures since 1936 of as much as 4F.

2) All individual station data has been obtained from the Individual Station Original Forms available from NCDC. http://www.ncdc.noaa.gov/oa/mpp/freedata.html#FREE

3) The comparison between rural and airport stations is unaffected by any TOBS considerations.  Temperatures at all stations used for this exercise were logged around sunset in the 1930’s and all 2011 ones at 7.00am. Therefore any TOBS adjustment will be essentially the same at rural and airport.

4) Station metadata has been checked for each station at NOAA to ensure compatibility. http://www4.ncdc.noaa.gov/cgi-win/wwcgi.dll?wwDI~GetCity~USA

5 responses to “Record Breaking High Temperatures – What’s Really Behind It?”