Browse: Home / 2011 / November / 21 / Vermont Greens End Up Protesting The Products Of Their Own Desires

Vermont Greens End Up Protesting The Products Of Their Own Desires 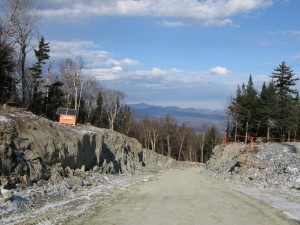 Just a few miles away from my hometown, Green Mountain Electric Power Company of Vermont and Quebec’s Gaz Metro are now building a monster mountain-top wind park that will be home (for 25 years) to twenty one 135-meter tall turbines that will go into operation by the end of next year.

To build the windpark they are now busily deforesting acre after acre and literally blasting off the top of the mountain, thus permanently disfiguring in a matter of weeks what took nature and the ice ages (climate change) hundreds of thousands of years to sculpture. Suddenly the environmentalists are fuming mad. Not this way, they insist.

Protesters even launched a website called Mountain Talk and are now making their presence known on the mountain.

Last week two protesters were arrested by the police for allegedly trespassing on the site. The two are reported to be students from nearby Sterling College, which according to its website is a “small, progressive, liberal arts college” that is committed “to grassroots sustainability”.

Were once enthusiastic supporters of renewable energy

What’s strange is that for years Vermont environmentalists railed against carbon based fuels and pressured legislators to produce “clean” energy. Never mind that over 90% of Vermont’s electric power was CO2-free to start with (hydro from Quebec and nuclear from Vermont Yankee). Vermont even elected Obama, giving him a whopping 68% of the vote. Let’s go green was the message. Now windparks are naturally getting installed on Vermont’s beautiful ridgelines. Doing that, though, isn’t easy. It involves massive deforestation to clear land for access roads and the windpark itself. Because Vermont mountains are ruggedly uneven, a good amount of dynamiting is part of it.

Suddenly environmentalists have woken up and are fuming mad about what they had for years enthusiastically endorsed. Many will deny this and claim that they never supported wind turbines. But looking at the website of Sterling College, where the two protesters attend, we see the following under Global Field Studies:

Either the protesters in Vermont are just plain hypocritical, or terribly confused. Sterling students even went to Japan (by plane) and saw this:

“Explore environmentally sustainable practices on the northern island of Hokkaido through visits to managed forests, organic farms, native Ainu communities, and  Zen gardens. Conversations with students and professors at Hokkaido and Obihiro  Universities lead to in-depth investigations into land use practices.”

That’s sure some amazing land-use in the photo above, wouldn’t you all say?

Okay, the protesters woke up awhile back and now realize that the green dream is in fact a nightmare. You’d think they’d vent their anger at the politicians who cleared the way for this energy transition. You’d be wrong. Throughout the Mountain Talk website, all you hear is a lot of whining and moaning aimed at…the corporations. At this point, I’d say they are confused.

If these protesters ever sat down down with energy managers, the first thing they’d hear is that there are lots of other cheaper, easier, cleaner ways of generating electricity than to blow up mountains and install monster turbines. Windmills and solar are hardly at the top of the power company’s wishlist for ways of generating electricity. They aren’t blowing the tops off mountains because they want to, but because they are being regulated to do so.

It’s too bad the protesters can’t get that through their skulls.

Protesters are turning to the politicians, begging them to stop the evil corporations. Pardon me, but it’s the politicians with the zany green ideas that need to be stopped. Mountain Talk quotes US Senator of Vermont Bernie Sanders here:

We are trying to save the world.”

In trying to “save the world” from a scientifically unsubstantiated doomsday, they are all ruining Vermont.

I truly do hope that the protesters succeed in stopping future mountain top windparks. If they pull it off, it’ll be what I like to call “One stupidity killing another.” Nowadays you have to take the victories anyway you can.