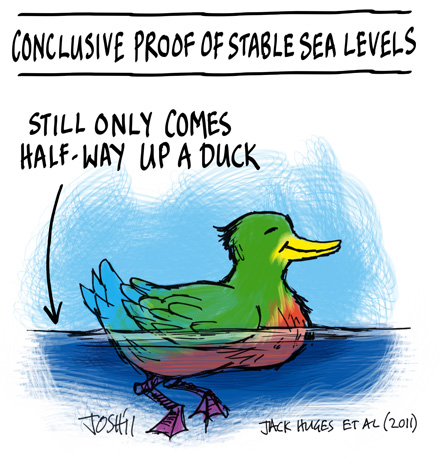 German “intellectual” online daily Die Zeit here interviews four (state-funded) alarmists (some more, some less) just to reassure its readers that the world is indeed coming to a catastrophic end.

Here it’s interesting to compare the remarks of Hans von Storch and Stefan Rahmstorf on the subject of sea level rise of the North Sea, as measured by tide gauges.

Especially important for us here in Germany was a study on North Sea sea level. Scientists at the University of Siegen showed what consequences climate change is already having on our own coastlines. The evaluation of the data from 13 gauge stations over the last one and a half centuries confirm a sea level rise – and an acceleration over the last few decades.”

Through an anylsis of synchronous fluctuations at many gauges, a rise in sea level of about 20 cm per century could be now be estimated.”

That’s a whole 2 mm per year, which is one seventh the rate of what Ramstorf envisions in his tamer wet dreams. Moreover, the link that Rahmstorf provides has a chart which clearly shows the rate of rise during the end of the 19th century was greater than what has occurred over the last few decades. He forgot to mention that.

One thing is clear: sea level measurement is fraught with complexity, and thus it would be easy for any shifty scientist to get the results he wants. But not to worry, we all know that they are, to quote Mark Antony,  “ambitious and honorable men”.

As far as the other content in the DIE ZEIT piece, it’s just the usual, alarmist pre-Durban crap. (Don’t waste your time)