Needless to say, the reaction to Germany’s bestselling skeptic book has been brutally harsh. In his piece, Iken reminds us of three rules in Germany:

1. Never praise the Pope!
2. Never doubt the multi-cultural society!
3. And do believe in climate change!”

Violating any of the above will get you into serious trouble. Since Vahrenholt’s and Lüning’s skeptic book has hit the bookshelves, the two authors have been met with a storm of outrage from the much of the media, numerous zealot activists and the political establishment. Vahrenholt’s own party comrade Michael Müller even labelled him a “climate denier”.

It is best kept silent that Vahrenholt is the director of RWE subsidiary Innogy for alternative energies. The same applies to the fact that the former environmental politician fought as a pioneer for the ecological movement, as the author of the book Seveso ist überall [Seveso is everywhere} and that he was the manager of the wind power company Repower. He has earned the right to be taken seriously. No one has to agree with him, but he needs to be discussed with.”

Die kalte Sonne website writes that one has to wonder about the massivve blind trust placed in the keepers of the unchallenged IPCC climate truth. Instead of entering into a fruitful discussion, brimstone and fire has rained down. Numerous scientists who agree at least with parts of the book’s argumentation are keeping silent for fear of being chastised by colleagues and loss of grant money. Unfortunately Germany has seen similar days some decades ago. The only difference today is that the science that challenges climate orthodoxy now gets called skeptic physics. 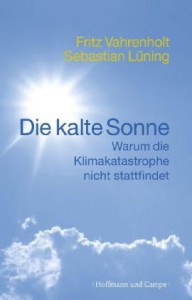 Critics also unfairly claim that the book was not written by real climate scientists. However, not only is Vahrenholt a professor of chemistry, he is also an expert in renewable energies – something the media keeps burying. One critic scientist even made the mistake of claiming that Lüning has not authored any real peer-reviewed papers. However, it turns out that he has authored or co-authoredover 30 publications, and, since two weeks, is the author of a bestseller: “Die kalte Sonne”, now ranked No. 14 on Spiegel’s bestseller list.

On the other hand, warmist Mojib Latif, a fierce critic of Vahrenholt and Lüning, has also just released a climate book. It’s ranked number 31,500 at Amazon, making it a real loser. Latif obviously is seething with envy and so has resorted to petty back-biting.

Die kalte Sonne also includes 4 guest authors who are distinguished experts and pioneers in their respective fields: Nir Shaviv, Henrik Svensmark, Nicola Scarfetta and Werner Weber. Scientifically, it’s as solid as can be.

As Francis Picabia once said: Our heads are round so that we can think in all directions. In Germany we often act like blockheads.”