NASA has recently issued a press release, here. A recent study by Davies & Molloy (2012) appearing in the Geophysical Research Letters shows that clouds have gotten lower over the first decade of this century. Hat tip: Die kalte Sonne. 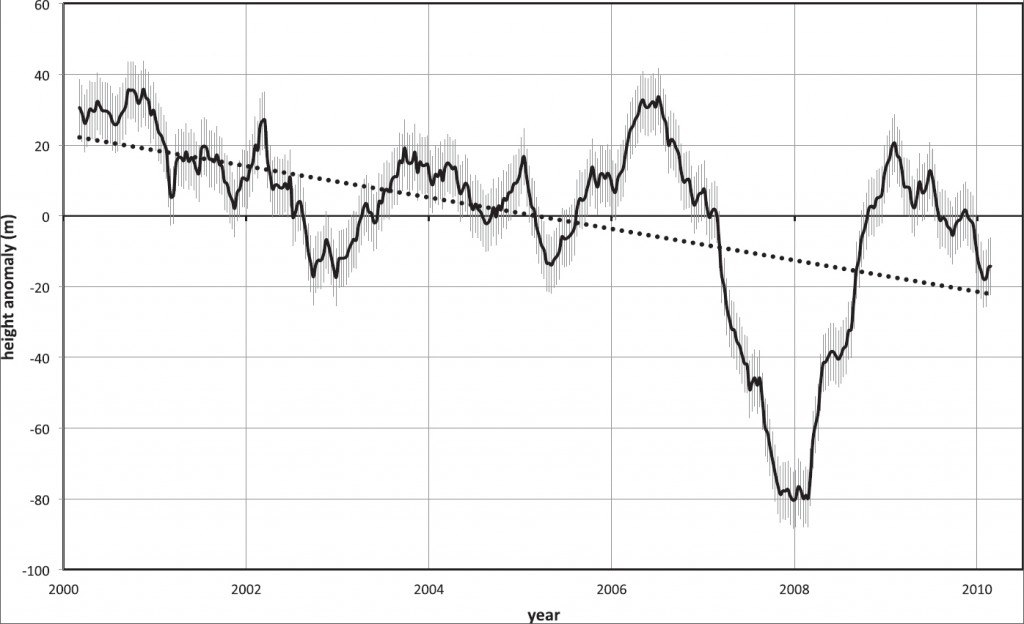 Data from NASA's MISR instrument show that global average cloud height declined by about 1 percent over the decade from 2000 to 2010, (Source: NASA)

Earth’s clouds got a little lower — about one percent on average — during the first decade of this century, finds a new NASA-funded university study based on NASA satellite data. The results have potential implications for future global climate.

Scientists at the University of Auckland in New Zealand analyzed the first 10 years of global cloud-top height measurements (from March 2000 to February 2010) from the Multi-angle Imaging SpectroRadiometer (MISR) instrument on NASA’s Terra spacecraft. The study, published recently in the journal Geophysical Research Letters, revealed an overall trend of decreasing cloud height. Global average cloud height declined by around one percent over the decade, or by around 100 to 130 feet (30 to 40 meters). Most of the reduction was due to fewer clouds occurring at very high altitudes.

Lead researcher Roger Davies said that while the record is too short to be definitive, it provides a hint that something quite important might be going on. Longer-term monitoring will be required to determine the significance of the observation for global temperatures.

A consistent reduction in cloud height would allow Earth to cool to space more efficiently, reducing the surface temperature of the planet and potentially slowing the effects of global warming. This may represent a negative feedback mechanism a change caused by global warming that works to counteract it. “We don’t know exactly what causes the cloud heights to lower,” says Davies. “But it must be due to a change in the circulation patterns that give rise to cloud formation at high altitude.”

NASA’s Terra spacecraft is scheduled to continue gathering data through the remainder of this decade. Scientists will continue to monitor the MISR data closely to see if this trend continues.

MISR, built and managed by NASA’s Jet Propulsion Laboratory, Pasadena, Calif., is one of five instruments on NASA’s Terra spacecraft, launched in December 1999. The instrument uses nine cameras at different angles to produce a stereo image of clouds around the globe, allowing measurement of their altitude and movement. For more on MISR, visit: http://www-misr.jpl.nasa.gov/ . For more on Terra, visit: http://terra.nasa.gov/ .

Another NASA mission that studies clouds is NASA’s CloudSat, also built by JPL and launched in 2006. CloudSat is the first satellite that uses an advanced radar to “slice” through clouds to see their vertical structure, providing a completely new observational capability from space. CloudSat’s primary goal is to furnish data needed to evaluate and improve the way clouds are represented in global models, thereby contributing to better predictions of clouds and thus to their poorly understood role in climate change and the cloud-climate feedback. For information on NASA’s CloudSat mission, visit: http://cloudsat.atmos.colostate.edu/ and http://www.nasa.gov/clouds.”

Cooling is the result of warming? How much more tangled up in a web of fantasies can one possibly get? And when they say “we don’t exactly know”, it really means they don’t have a clue, or they know but it’s a reason they are not supposed to mention.  Wasn’t CO2 supposed to cause positive feedbacks, and not negative feedbacks? Time to rework the models.

The decrease in high clouds means an additional cooling effect has been in place over the first decade, one that has not been taken into account up to now. It is known that global temperatures have not risen since the year 2000. The exact cause of the newly described cloud effect is still not known.

Larger deviations of the falling effective cloud height appear to be controlled by the Southern Oscillation, which is an internal oceanic cycle (see p. 313-314 in ‘Die kalte Sonne’). Could there be another longer period Pacific Ocean Cyclic, the PDO, behind the cloud trend? This remains speculation. But it is interesting to observe that the PDO also began its downward trend in the year 2000.

Die publication from Davies & Molloy (2012) appeared in the Geophysical Research Letters of the AGU.

At MeteoKlima Christian Heuer discusses whether this could be Richard Lindzen’s Iris Effect (see p. 168-170 in “Die kalte Sonne”), that is a negative, dampening feedback that counteracts global warming.”

Amazing how everything that Vahrenholt and Lüning wrote in their book, which a number of German scientists have just recently dismissed offhand without reading, is turning out to be spot on.