Arctic Ice Melt – Is The End Of The World Coming?
by Klaus-Eckart Puls (Translated and edited by P Gosselin)

Over the last years things have been very quiet among the climate alarmists and prophets of catastrophe because: 1) The global temperature did not rise for 14 years, and instead is now showing a slight downward trend (Is the quiet sun having an impact?) and 2) In contradiction to the IPCC forecasts, sea level rise shows no acceleration, and at many coasts it is even showing a slow-down, e.g. at the German Bight (read here).

Since the minimum of 2007, Arctic sea ice began to recover, until 2011. Now – in summer 2012 – there was “finally” a new minimum of just about 2% below the 2007 value. Among the alarmists this was cause for an outbreak of hysterical jubilation: Finally the headlines of the “coming end of the world” were back.

1) It should have been clear even among the ‘most naive’ journalists (but obviously it wasn’t!) that neither the modest 0.7°C of global warming nor the 14 years of declining global temperature could be responsible: 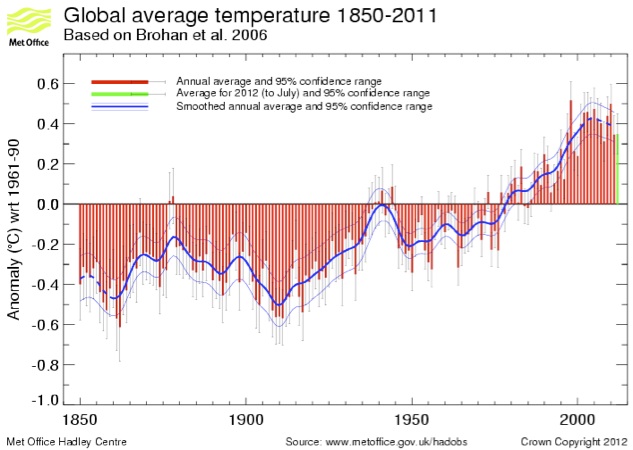 The source of the above graphic is the IPCC-friendly Hadley-Center. It shows that since 1998 there’s been no temperature increase; instead there’s been a downward trend going on through July 2012 (…and that with continuously increasing CO2! …where’s the correlation?).

(2) The scientific literature also shows that for a long time now there has to be other reasons to explain the glacier-ice sheet melts, namely soot and dust which are (not only) produced by man.

(4) And as the Arctic ice is decreasing, ice in Antarctica is growing as it is getting colder there. Neither event is a climate catastrophe.

(5) Arctic sea ice melts have occurred time and again in the past.

(6) In relation to point no. 5: It’s been known for a long time in Arctic research that there are natural fluctuations/cycles of 60/70 years. This is repeated by the Alfred Wegener Institute (AWI):

(c) And, again from the AWI, Prof. Dr. Miller (AWI Vice Director): ‘We can’t say with certainty when and whether the Arctic will become ice-free.’ (Source: Prof. Dr. Heinrich Miller, interview with Professor Dr. Heinz Miller, Deputy Director of the Alfred Wegener Institute. As a geophysicist, he works with climate reconstructions and ice dynamics, 3 November 2007; http://www.awi.de/).

(d) AWI Director Prof. Dr. Karin Lochte in a FASZ interview (FAZ 16 November 2007, p. 46) concerning the question of whether the large ice lost in the summer of 2007 is an indication for the man-made warming: ‘We have to wait and see. We still don’t know today if we will have more ice once again in five years…’

(e) And again Karin Lochte on that question upon the research ship FS POLARSTERN having circled the North Pole in 2008, on whether it’s global climate change: ‘That is not clear… There’s no answer to the question of whether the decline in sea ice will continue, or if there will be a colder phase.’ (ElbeWeserAktuell daily, 29 October 2008, p.6 BC).

The Arctic ice melt of the last 20 years is for the most part a well-known, natural ‘cyclic phenomenon’ that cannot be explained by the moderate secular temperature increase of 0.7°C (in the Arctic about 1°C) , and also not by the CO2 increase.