When the Arctic set a record sea ice minimum back in August, the European mainstream media and government funded climate institutes howled in a deafening, days-long chorus of “global” climate Armageddon. 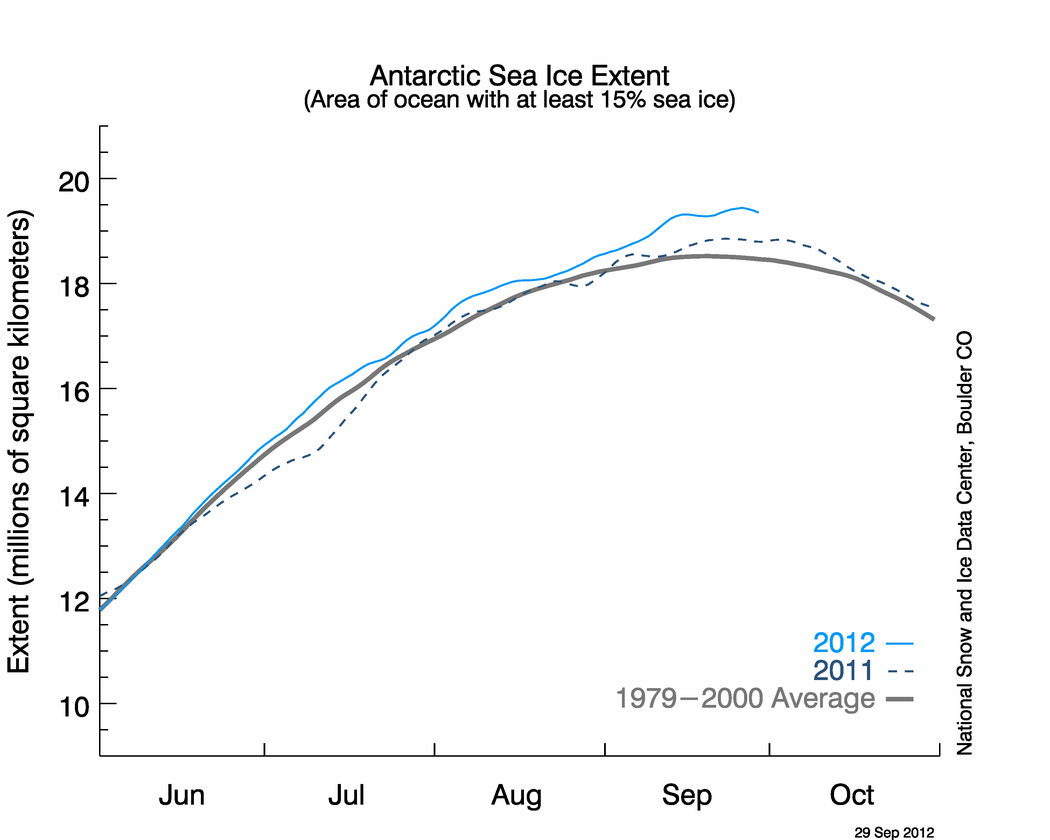 Now fast forward one month to late September 2012 with the sea ice peaking at the opposite end of the planet, i.e. Antarctica. Knowing that the media has grown particularly sensitive to weather extremes, you’d think this current weather extreme around Antarctica would have set off a similar reaction. Any extreme, we are told, is proof of global warming.

All that extra ice beyond the 70°S latitude will reflect the sun’s precious heat back out into space, thus cooling the water even further, which means more ice will eventually develop, and thus there’s a real risk of reaching a dangerous and irreversible tipping point into unstoppable warming-induced cooling.

So why haven’t the media reacted? Well, there’s a limit to just how far the public and politicians, as gullible as they are, can be fooled. The media know where that line is: in Antarctica. When a cold, bitter and snowy winter strikes, only absolute morons actually believe that it is induced by global warming, and the media know that there are enough of them making up their readership. But when it comes to believing that global warming causes 19.5 million sq km of ice to form around Antarctica, even the media do not expect its dimwit readers to believe that. So they are keeping completely deaf and dumb about it. Informed readers, after all, are the last thing they want.

So not a peep of this has been mentioned anywhere in the German mainstream media.

If we google “Rekordeis” and limit the search to the last 7 days, we get thousands of reports of the Arctic melting, although it’s old news, but no reports of Antarctic sea ice setting a new all-time maximum.

Except for stories at German skeptic blogs EIKE and Science Skeptical, there’s nothing about this extraordinary event occurring at the South Pole in the major media outlets like German public television and radio, Spiegel, Bild, and at the major dailies. Also the main German climate institutes like the PIK, AWI and MPI are completely silent about it. They have no way of explaining this one.

So what can we conclude from this? The media saying absolutely nothing about this says a lot!

This is one genie they are not going to be able to keep bottled up.

Get used to it.