Germany has spent money on renewable energy, like wind and solar power, like few others in the world. So far the country has invested hundreds of billions. How’s the return on investment? Pretty lousy, especially this November.

The European Institute for Climate and Energy (EIKE) today has a story on how wind parks and solar panels are performing: Germany’s renewable energy in November! Only 7 % of the installed feed-in capacity was fed in.

When Germany exports some energy to France, the media hypes it up everywhere in the evening news…proof that Germany’s energy transition to renewable energy is paying off!

But that, it turns out, is a rare event. Ralf Schuster, for example, took the October data from the EEX in Leipzig and plotted the following chart, which depicts wind and solar feed-in, import from France, and export to France. I’m not going to get to much in the details here. The chart below shows that the exports (green shaded area) are rare and import from France (red shaded area) is the normal situation. 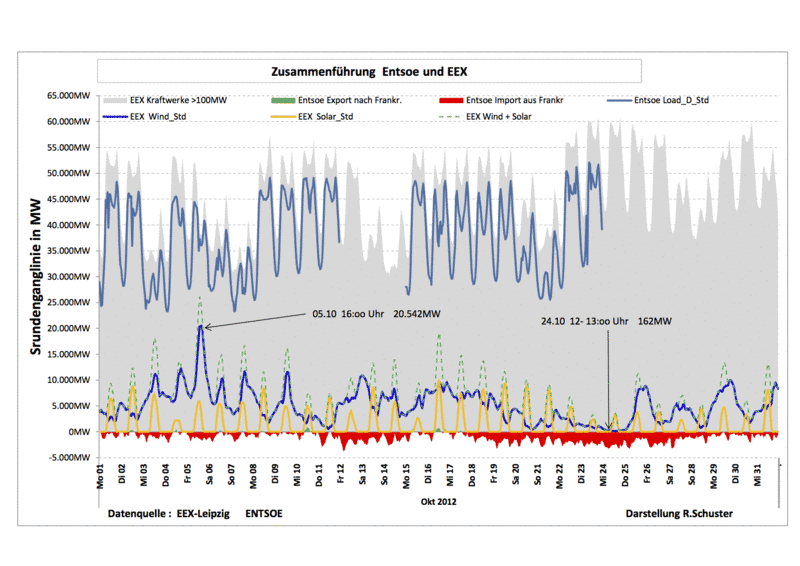 Schuster then took a look at how much solar and wind power was fed in last week from 9 November to 15 November, 2012. He found that of the 64,000 MW of installed wind + solar capacity in Germany, less than 5000 MW was fed in. That comes out to just over a whopping whole 7%!

Now imagine paying 100 employees and seeing only 7 of them working, and that for an entire week. It wouldn’t be long before you went bankrupt.

This kind of performance should be considered before any country, state or community allow itself to be duped into investing in green energy sources.

It’s not for nothing old societies back in history abandoned windmills. They weren’t effective back then, and they certainly are not efficient today.

13 responses to “Germany’s Massive Renewable Energy System Puts Out Only 713 Of It’s Rated Capacity in November!”