Lately climate scientists have been telling us that cold weather is now evidence of warming, hard winters and big snowstorms, too.

Well, it turns out that the current global temperature stagnation is also now strong evidence of global warming. At least that’s what climate modeller Prof. Reto Knutti writes at the Swiss Federal Institute of Technology Zurich blogsite in a piece titled: “Climate is (not) taking a break”, where he twists himself into a complex pretzel to explain why there’s been a global temperature stagnation. Hey, our models actually predicted it! 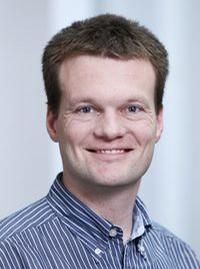 In his blog article he starts by claiming that the stagnant temperature of the last 15 years: “…is nothing unusual: Also during the 20th century there were periods of stagnation, and even cooling. Even climate models show such behaviour – also for the future. So they do not contradict the long-term global temperatures.”

It wasn’t long ago that climate scientists were claiming things were “worse then we thought” and that the climate was careening out of control. Now that the climate is not changing at all, they are suddenly saying they aren’t surprised at all, and are even starting to claim their models had projected it.

Knutti even takes it a step further. In his piece he even tries to have us believe that the stagnation is actually evidence of warming! You see, from dozens of models, he managed to find one or two that foresee periods of stagnation interrupting the overall warming. He writes:

Since the beginning of the 1970s, the global temperature has risen strongly. However in the last 10-15 years the trend has flattened out considerably. Depending on the year used as a starting point, the trend is practically zero. This is what temperature curves from the different institutes show. Even when there are some slight variations between the curves, they all show the same pattern [1].

The fact that the global temperature rise has stagnated does not contradict long-term climate change. To the contrary: Also in the future we have to anticipate short periods of stagnation or cooling. In principle, the science is not surprised by this finding. This is because such short-term temperature behavior also occurs in climate models (see chart). And that, by the way, in the same models that postulate an anthropogenic temperature increase over the long term.”

I placed the emphasis on “To the contrary” because it tells us that Knutti is claiming that because there is a stagnation today, and the models said there would be, the longterm-warming trend for the next 100 years has to be right. Such is the science of a climate modeller.

Here’s the chart he refers to, along with the text below it: 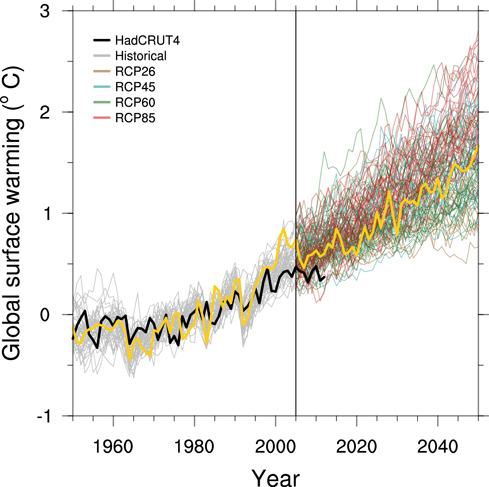 “Global temperature change in simulations from climate models from CMIP5 for the historical period (gray) and for various scenarios. Each line depicts a simulation. The observed data are depicted in black. As an example, one simulation, marked yellow, shows especially strong warming until the year 2000 and then followed by a period without warming over 20 years.”

Because the yellow model has it right, it has to mean that the modelled warming is correct – Knutti is suggesting. This is as preposterous as science could ever get. From dozens of models, he cherry-picks the one or two that support what he wants to believe.

One scientist has pointed out to me that there’s even a model that doesn’t show any warming until 2050. He wrote in an e-mail: “There is even one model curve which has hardly any warming until 2050. That must be their fall-back rescue anchor. If temperatures in 2050 are like today’s, then they will still claim they were right.”

So what’s the cause of the current stagnation?

Knutti proposes a variety of explanations: “Aerosols or also land-use. Then there are natural factors, like volcanos erupting or solar activity and internal fluctuations (weather). They all vary – and with it the annual temperature increase.”

Knutti also adds that the sun and El Nino phenomenon perhaps play a role in the stagnation. About temperature stagnations he even says: “They are to some extent a type of extreme event of the future.” And thus are evidence of climate change?

Of course, we don’t think for a minute Knutti himself actually believes the rubbish he is spewing above, i.e. stagnation supports the CO2 warming theory. At the end of his essay he even makes a confession, and opens the door to the possibility CO2 may be completely exaggerated:

It could be that the temperature reacts less strongly to changes in greenhouse gas concentrations in the atmosphere than assumed (over-estimated climate sensitivity). Or to put it in another way: The climate models may be over-estimating the warming. The global temperature of the last 10-20 years is pointing in that direction, however it is precisely the models with the higher senitivity that are simulating the mean climate the best.”

PS: Here’s a chart of CMIP5, h/t a reader. Where’s the predicted stagnation?