Share this…FacebookTwitterUPDATE: Reader Chris Frey below comments that it’s only a 43-year record – not 100 years! Either way, it’s lots of snow. Today Focus magazine reports that Berlin has set a new record for the amount of snow on the ground in the month of March. The online news magazine writes: A 16-centimeter blanket […] 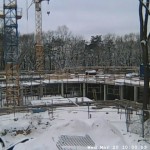 Share this…FacebookTwitterOther than NASA GISS, few institutes are as climate warming-obsessed as the Potsdam Institute for Climate Impact Research (PIK). To keep the global warming fear machine up and running in the future, it looks like the PIK is expanding its facilities (warning: at this PIK link there’s an atrocious translation to English). Hello? Anybody here? […]