By P Gosselin and Arne Garbøl

Huge doubt over claims made by alarmist climate scientists is now spreading to leading Scandinavian publications, the Jyllands-Posten in Denmark for example. 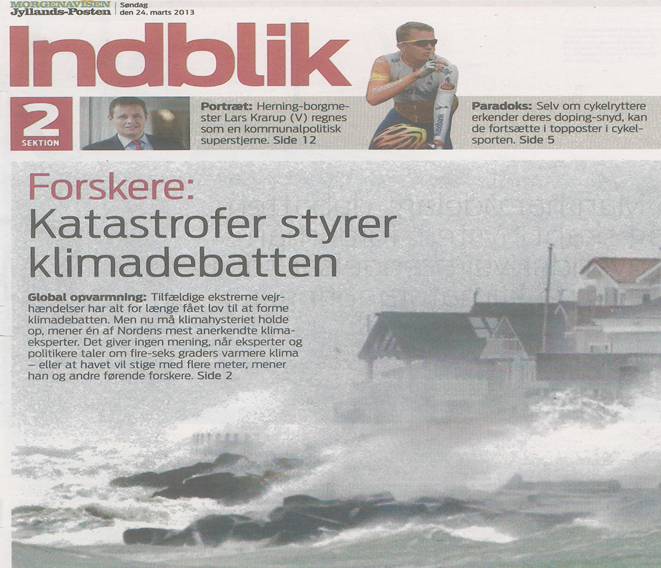 Though Bengtsson believes CO2 is warming the planet somewhat, he says it’s real impact has been grossly exaggerated.

“For too long random extreme weather events have been allowed to shape the climate debate,” writes the Jyllands-Posten (JP). The article tells its readers it’s time to get back to rationality and science. 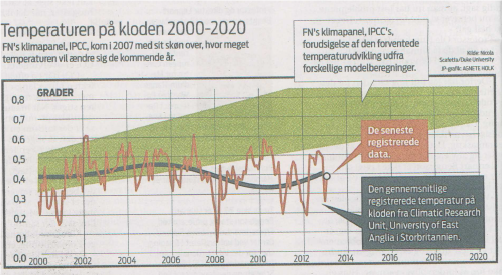 What catastrophe?, the Jyllands-Posten is asking with the above chart (Scafetta). The models so far have been completely wrong!

The JP writes Bengtsson “is angry and disappointed by the spread of so many untruths and lies about the climate, and especially the future climate, and that it is totally spoiling the climate debate. […] and he is really tired of politicians, media, and climate scientists over-dramatizing the climate development and the consequences of more greenhouse gases in the atmosphere.”

On the rate of warming JP cites Bengtsson: “it is a good deal lower than what IPCC has put forward…totally different from the report the World Bank presented.” This type of reporting by major dailies is not the kind of thing Danes and Europeans are accustomed to reading. Clearly climate science is being seriously challenged in Denmark.

This is not the first time that Bengtsson has been vocal on the topic of climate hyper-ventilation, see here and here. Bengtsson goes so far to say that the IPCC and World Bank reports at times sound like end-of-the-world declarations.

Look at the real data

The JP writes that Bengtsson thinks its completely wrong to use weather events as evidence of climate change, and is asking journalists and politcians “to take a closer look at what is happening in the world’s real climate.” For example: “In Uppsala we have measured temperatures since 1722. Nothing indicates that
climate here is running amok in global warming.”

The JP then writes that scientists who do not share catastrophic climate views risk being marginalized, citing criticism by Professor Ole Humlum, and that young scientists no longer dare to speak up. “It created an outcry. It’s a little bit ironic that it now appears to be correct,” Humlum says.

In the article Bengtsson is quoted saying that the CO2’s impact is exaggerated. “Climate models showed a faster warming than what we have seen.” Both Ole Humlum and climate scientist PhD Nicola Scafetta of Duke University in North Carolina agree. JP shows a temperature chart from Scafetta comparing projected temperature to observed (see above).

Hysteria is rampant when it comes to the Arctic ice melt

Bengtsson also tells the JP that the significance of the recent Arctic ice melt has been completely blown out of proportion, “We know that there was very little ice in the Arctic in the thirties and the forties.” JP writes that Bengtsson is far from being alone with that view, citing Professor Ola Johannessen, who “agrees that the climate debate is dominated by catastrophic statements, which has nothing to do with reality.” The JP takes a lengthy look at the situation in the Arctic, and shows that nothing really unusual is happening there. It’s likely that many Danes breathed a sigh of relief after reading the Jylland-Posten piece.

The news about Greenland and Antarctica are also hugely over-hyped. JP quotes Bengtsson: “Worrying about Antarctica melting is like worrying about the Earth and Venus colliding within the next billion years, which some models show could happen.” This is an opinion that is also shared by Johannessen, who called James Hansen’s claims “nonsense”:

Once American scientist James Hansen said that Greenland ice would melt within some hundred years, but this is nonsense. If global warming continued, it would take thousands of years.”

No link between warming and greater sea level rise

Lennart Bengtsson also warns against sea level rise alarmism: “The fact is that we can’t see a link between the warming and the increased sea level. The global warming has until now been totally harmless.”

JP also cites leading scientists in the article, assuring that the climate on the planet just doesn’t tip. There are built-in mechanisms to prevent this. History clearly shows this.

The Jyllands-Posten piece represents another major step by important elements of the European media in taking a tougher and more critical look at climate science. Prominent climate scientists are speaking out, and the media is handing them the megaphone.