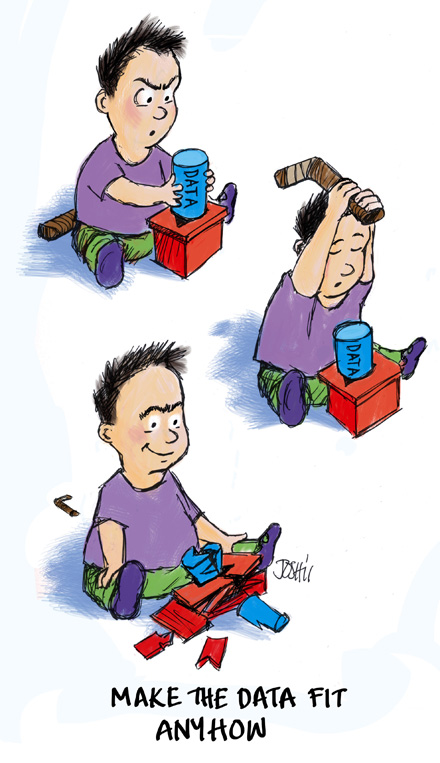 For more than 10 years Germany and large parts of Europe have been seeing a trend to colder winters with considerable phases of snow and cold, especially over the last five winters. This is in stark contradiction to the established climate science. For example in 2000 we heard from IPCC climate scientist and lead author Mojib Latif: “Winters with strong frost and lots of snow like what we saw 20 years ago will no longer exist at our latitudes”.

Today in 2013 we are seeing harsher winters persisting until the end of March! This is an embarrassing calamity for German climate alarmists, who 2 years began concocting a meteorologically adventurous hypothesis in an attempt save face. The alarmists:

“The Potsdam Institute for Climate Impact Research now sees the harsh winters as being a consequence of global warming, which now causes icy winds in the Arctic to find their way unobstructed to Europe because of climate change.”

Let’s look at the facts.

The winters in northern and central Europe have been cooling for more than 10 years, Fig. 1: 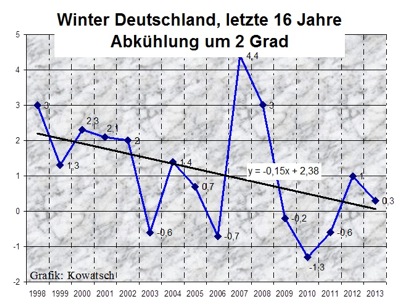 This cooling trend is also observed in the mean annual temperature values, globally (stagnation) [2], as well as in Germany: 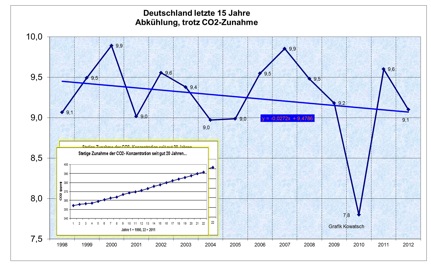 The climate models had predicted nothing of the sort. Especially embarrassing is that 10 years ago we heard in interviews with leading climate scientists and read statements like the following [3]:

“Good-bye winter: Never again snow? In Germany cold winters are a thing of the past.”

Today nature is contradicting the model projections for annual and wintertime temperatures. And now, after the fact, the alarmists are busy concocting dubious explanations. The Alfred Wegener Institute [4]:

The model calculations show that atmospheric pressure difference is weakened by minimal Arctic sea ice cover later on in the winter and thus cause the Arctic cold to move all the way down to middle latitudes.”

From a meteorological standpoint, there’s a lot to be said about that:

(1) Proof that winter weather in one region can be derived from the earlier summertime weather of another region has yet to be found by the generations of meteorology! If it were the case, the problems of longer-term seasonal forecasts would be finally solved.

Even the climate alarmists are publicly skeptical of their new “silver bullet” science, and deeply so. Alfred Wegener Institute (AWI) scientist Ralf Jaiser added: “Of course a great number of other factors play a role in our complex climate system that at times overlap each other. […] Other mechanisms are for example related to snow cover in Siberia or to tropical influences. The interrelationships between these factors of influence are subjects of future research work and thus remain factors of uncertainty for forecasts.“

The studies of this development are ongoing, and so at the moment no conclusions can be made on whether or not Central Europe will have the ‘pleasure’ of cold easterly winds more frequently.”

In a nutshell, nobody knows anything for sure. Yet, the chattering elite media now have more climate-catastrophe fodder for their dependably gullible readers, at least through Easter.

(2) If the new alarmist hypothesis were conclusive, then we should have seen mostly cold winters for the last 20 years, because this is a time period where we have seen relatively little Arctic sea ice cover in the summertime (see Fig. 3): 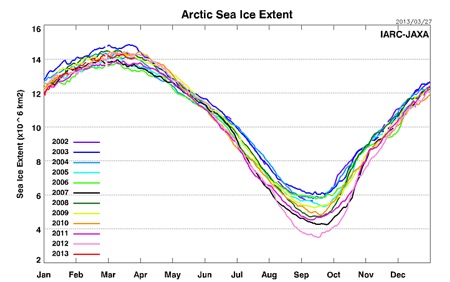 However, we only have seen a higher frequency of cold, snowy winters only over the last five years.

Here the alarmists are playing it on the safe side and are not mentioning one certain aspect: After the annual summertime minimum, the ice area always recovers over the following winter (Fig. 3) and reaches the long-term mean value (currently it is slightly above normal). Lots of ice “generates” lots of cold air, which at times plunges down into Central Europe due to the stochastic cycles of the North Atlantic Oscillation (NAO). And sometimes it does not (see Fig. 4). To this day there is no correlation whatsoever between NAO with CO2.

Our winter weather is still always made in the winter, and there is absolutely no evidence for claims to the contrary!

(3) The decisive argument against the new “Warm-Cold-Hypothesis” is as follows:

If this hypothesis were scientifically, or at least statistically conclusive, then the NAO index (air pressure difference between Iceland and the Azores) over the last 30 years would have been negative for the most part. However, the exact opposite is the case, see Fig. 4:

Over the last 5 years we’ve had cold winter-phases with snow and blasts of cold air when the NAO index was positive as a whole. Thus, in contradiction to the claims of the climate alarmists, the cold air of this winter, as was the case in the last winters, did not come at all from the north from (the Arctic), but rather mainly from the icy east winds from Russia and Southern Scandinavia.

That alone suffices to refute the crude claim: “Our winters are getting colder because the summers in the Arctic are geting warmer.”

The Weltwoche [8] from Zurich quotes PIK scientist Stefan Rahmstorf: “The ice free areas of the oceans act like heaters as the water there is warmer than the Arctic air above. This produces more ideal conditions for high pressure systems that steer cold air to Europe.”

Moreover, the Arctic is not made up of ice-free areas, but of ICE. This is true today (Fig. 3).

Again quoting Stefan Rahmstorf: . “…oceans act like heaters because the water there is warmer than the Arctic air above.. This produces more ideal conditions for a high pressure system…” The exact contrary is stated in meteorological textbooks:

The wintertime static cold highs form above cold, snow-covered ground. A classic example are the annual(!) wintertime cold highs over Siberia and Russia.”

In other words: Such a high cannot form over “warm” Arctic water. Exception: it occurs dynamically through convergences in planetary waves in the middle atmosphere. But such highs are, as a rule, not very stationary. Moreover, the (more seldom) thermically static highs on the other hand are very much so. This 2012/13 winter proves it with its constantly re-generating cold highs over Scandinavia Russia, which went on for months.

In the meantime some media outlets [9] have begun to notice that the explanations on these developments coming from the established climate science institutes are in stark contradiction to their models, and have appeared after the fact:

“…are three cold winters…coincidental?” … “Such winters are incomnvenient not only for those who freeze in the, but also for those who earlier projected warmer temperatures because of CO2 emissions.” … “The reality is, writes American climate scientist JUDAH COHEN, that we are freezing not despite climate change but because of it” … “But such an explanation would be convincing if it had not come after the fact. Instead the exact opposite had been announced for decades.”

Some media outlets are becoming distrustful as a result of these contradictory claims, as the following headlines show:

We’ll have to wait and see. But in the meantime, it looks like global warming is over! [12]