Spiegel (Unwittingly) Confirms Its Undeniable Movement Away From Climate Catastrophism!

Ironically, in what was designed to be a sharp attack on “climate change deniers”, turns out to be an unwitting confirmation by Spiegel that it has profoundly changed its position on the climate issue. And, although Spiegel may not be aware of it, its article even de facto endorses the position of climate “deniers”, i.e. that climate changes [naturally] and that man [only] has “an influence” on climate.

Well, what the hell probably doesn’t?

Online Spiegel now says man only has “an influence on the climate change process”.

By now a Spiegel editor reading this might think: “What is NoTricksZone writing here!” Allow me to explain.

In its latest online attack article, Spiegel cites an old, already discredited Lewandowsky paper from July 2012, with the aim of taking cheap shots at American right-wingers. But note how Spiegel starts its article, in yellow above, (my emphasis):

The overwhelming majority of climate scientists agree that the climate is changing and that the man-made CO2 emissions have an influence on this process.”

Man has an influence? Really? That’s it – just “an influence”? Why didn’t Spiegel write something like “man-made CO2 emissions have a serious and unprecedented impact on this process” – like they always used to do? The following depicts what Spiegel used to think what “man’s influence” on climate was: 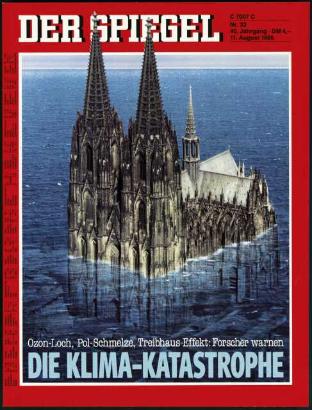 Now man only “has an influence on the climate change process“. Wouldn’t you say that’s a very profound position correction by Spiegel? My, how the times have changed!

Of course Spiegel won’t admit this outright. They were probably hoping nobody would notice this slight position adjustment. Coming to terms with the fact that you had behaved like an irrational alarmist for decades is a long process that requires time. But Spiegel’s position trend on the climate issue is undeniable: going from a flooding catastrophe to some undefined influence.

In the 1980s, 90s and 2000s, Spiegel, convinced a climate catastrophe was coming fast, rolled out one alarmist report after the other. But by the end of the 2000s an article or two with skeptical tones started appearing. Stefan Rahmstorf reacted immediately to this thought emancipation and tried to bully Spiegel back into line. But nobody bullies Der Spiegel. The news magazine of German intellectuals followed with more skeptical articles, one even personally singled out and attacked Rahmstorf. Today Spiegel writer Axel Bojanowski, a geologist, writes regular articles that often pour cold water on irrational and alarmist climate scenarios.

Skeptics don’t deny (man-made) climate change. We are the ones who have been telling you it happens all the time! What we deny are the alarmism and the catastrophic scenarios. And yes, many among us are confident free markets are the way to go in coping with any change.

Yesterday’s online rant was perhaps written by a leftover alarmist and meant to take shots at American right-wing “deniers”. Oddly, and uncharacteristic of Spiegel, the piece was about old news from last year – perhaps fill-in for Easter. Lewandowsky’s paper has long since been discredited. The Spiegel author likely didn’t even bother Googling about it. Or, he/she just denied the facts.

In fact, the very people that Lewndowsky labels as deniers, those who he claims tend to believe the moon-landing was staged, include former NASA astronauts. The paper is just pure stupidity.

We can all agree with Spiegel’s new, sober position, and we very much welcome them joinng the more skeptical, rational, and critical position. Most of us will agree that you’d have to be a kook to believe that man doesn’t have some influence on climate through agriculture, land-use, aerosols, deforestation, etc. They might represent a couple percent of the skeptic ranks.

The real issue is: are we headed for a catastrophe of proportions depicted by the alarmists, e.g. Spiegel 1986? The answer clearly is no. Economic and civil suicide is not necessary. There’s plenty of time for the sensible upgrading of energy systems. In the meantime, go out and enjoy the Easter-time global warming.

6 responses to “Spiegel (Unwittingly) Confirms Its Undeniable Movement Away From Climate Catastrophism!”