Yesterday here I wrote about some comments made by Hans-Joachim Schellnhuber at a press release  last week on the first day of the World Conference on Climate Impacts in Potsdam Germany.

While answering a question from a journalist about why global temperatures have stagnated over the last 15 years, Schellnhuber blamed the cool oceans for absorbing the heat that everyone is missing and searching for.

At around the 35-minute mark of the video, Prof. Schellnhuber tells us (my emphasis):

So what we probably see now is a sort of saturation of deeper ocean layers, …but once the job is done, the surface will warm once again, and even faster actually later on. This is by the way accompanied by, if you look at the data as I did this morning, you had many more La Nina events, that is the cool phase in the Pacific, in the last decade then you had in the previous decade. This is in a sense precisely in a La Nina event the oceans more or less take up heat while in an El Nino event they release heat. So just wait for the next big El Nino and we will have again a boost in global temperature.”

First it is clear that Prof. Schellnhuber doesn’t really know where the heat is, and is only assuming that it is hidden at the “deeper layers of the ocean“.

Secondly, and more importantly, he tells us that La Ninas take up heat from the atmosphere and that El Ninos release heat into the atmosphere. “So just wait for the next big El Nino and we will have again a boost in global temperature.” Clearly he is telling us that the oceans indeed do have a big impact on global temperature. So why hasn’t he included this in the models?

The following chart shows the PDO:

The chart above clearly shows that the massive equatorial Pacific was releasing mega-heat into the atmosphere from 1980 – 2007. This heats up the global atmosphere just as Prof. Schellnhuber describes above. The question is what factor got all the credit for that heat? The PIK and many warmist scientists wrongly assigned it to CO2. But now that the globe has stopped warming, they are blaming the oceans.

Why was the heat released by the 1980 – 2007 positive PDO not properly assigned in the climate models? No wonder the models look like jokes today. Schellnhuber needed the PDO heat in order to make CO2 look bad. It was the only way to come up with a dangerously high CO2 climate sensitivity.

The same applies with the Atlantic Multidecadal Oscillation (AMO): 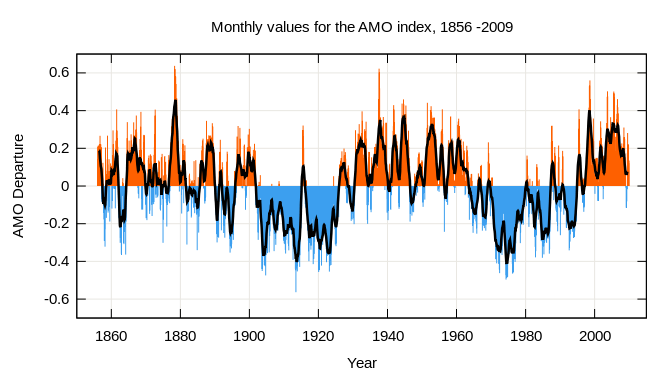 So the heat that was added by the positive PDO and AMO since 1980 has to be subtracted from the CO2 account. If you do that, then you will see that CO2 climate sensitivity is far less, and is no longer a problem.

Good to see that Schellnhuber acknowledges the AMO and PDO. All he has to do now is build them into his climate models.

9 responses to “Schellnhuber Slips, Confirms Ocean Cycles Do Play A Major Role, Yet Hasn’t Added Them To Climate Models”