U.K. Energy Secretary Ed Davey will make his strongest attack yet on climate change skeptics he accuses of purveying a what he calls a ‘seductive’ and’dangerous’ message that global warming has stopped.” 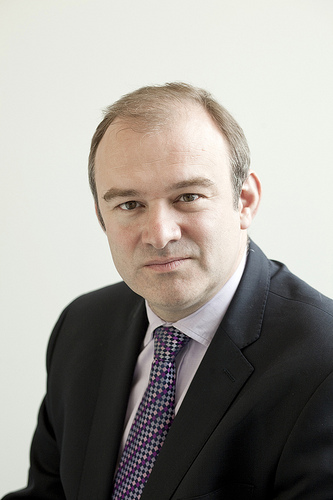 Davey insists that global warming hasn’t stopped. Yet, a number of prominent warmist scientists don’t agree with the fear-stoking politician. Reader Jimbo sent me a list of comments from climate scientists acknowledging that the warming has stopped. Some of these scientists even recognised this years ago already.

5 July, 2005
“The scientific community would come down on me in no uncertain terms if I said the world had cooled from 1998. OK it has but it is only 7 years of data and it isn’t statistically significant…,” Dr. Phil Jones – CRU emails.

15 Aug 2009
“…This lack of overall warming is analogous to the period from 2002 to 2008 when decreasing solar irradiance also countered much of the anthropogenic warming…,” Dr. Judith L. Lean – Geophysical Research Letters.

19 November 2009
“At present, however, the warming is taking a break.[…] There can be no argument about that,” Dr. Mojib Latif – Spiegel.

19 November 2009
“It cannot be denied that this is one of the hottest issues in the scientific community. [….] We don’t really know why this stagnation is taking place at this point,” Dr. Jochem Marotzke – Spiegel.

13 February 2010
Phil Jones: “I’m a scientist trying to measure temperature. If I registered that the climate has been cooling I’d say so. But it hasn’t until recently – and then barely at all.”
BBC: “Do you agree that from 1995 to the present there has been no statistically-significant global warming?”
Phil Jones: “Yes, but only just.”

2010
“…The decade of 1999-2008 is still the warmest of the last 30 years, though the global temperature increment is near zero…,” Prof. Shaowu Wang et al – Advances in Climate Change Research.

18 September 2011
“There have been decades, such as 2000–2009, when the observed globally averaged surface-temperature time series shows little increase or even a slightly negative trend1 (a hiatus period)…,” Dr. Gerald A. Meehl – Nature Climate Change.

14 October 2012
“We agree with Mr Rose that there has been only a very small amount of warming in the 21st Century. As stated in our response, this is 0.05 degrees Celsius since 1997 equivalent to 0.03 degrees Celsius per decade.” Source: metofficenews.wordpress.com/, Met Office Blog – Dave Britton (10:48:21) –

30 March 2013
“…the five-year mean global temperature has been flat for a decade,” Dr. James Hansen – The Economist.

22 February 2013
“People have to question these things and science only thrives on the basis of questioning,” Dr. Rajendra Pachauri – The Australian.

Many are using the word “pause” or “break” to describe the recent trend because they refuse to believe their theory is failing before their eyes. But this is only the language of denial.

Even the German Federal Environment Agency (UBA) admitted that the warming has stopped and are puzzled by it: “In the years leading up to the year 2000, the temperature curve rose very sharply. But since then it isn’t rising so, in fact it’s not rising at all, the curve. The average temperature has stagnated at a very high level – we sort of have a plateau, and that during a time when CO2 emissions have risen considerably.” (2013)

And even the prince of climate darkness himself, Hans Joachim Schellnhuber conceded in April that the “pause” may even continue another decade!

Many insist that it’s only a pause, and that temperature will resume climbing with abandon once the hidden heat comes out of hiding deep somewhere in the ocean. But that’s pure speculation with no data to back it up. Right now the atmospheric data and observations are clear: