Just when you thought going green could not get more outrageous, now comes one of the most enraging plans imaginable: erecting a large-scale wind park next to the sacred D Day beaches of Normandy, where thousands of soldiers died to liberate France and Europe in 1944. 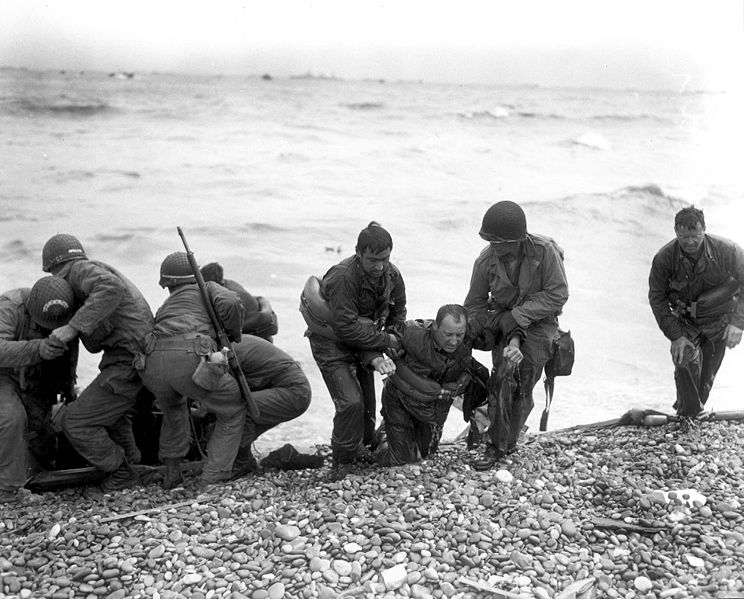 Members of an American landing party lend helping hands to other members of their organization whose landing craft was sunk be enemy action of the coast of France. These survivors reached Omaha Beach, by using a life raft. Photographer: Weintraub, 6 June 1944. Image source: U.S. federal government, the image is in the public domain.

The English-language The Local from France reports here that “A controversy is brewing over plans to construct 75 windmills in Normandy, next to the site of the D-Day landings in WWII. Opponents of the French project say the windpark would be an act of desecration. […] desecrates the memory of the liberators.”

The Local writes that the project is being proposed by French power company EDF, which plans to construct seventy five 100-meter tall windmills near the beaches where British and Canadian forces landed and thousands lost their lives. The Local adds:

‘These beaches belong to history. It’s from here that the liberation of the world began. If you allow the comparison, I don’t think the Germans would permit the construction of a wind park next to the ruins of a concentration camp. These are sacred areas,’ said Karel Scheerlinck, a Belgian who lives in the town.”

Is this how some people in France say “merci”? Talk about ingrates. For a nation that prides itself in being sophisticated, this idea sure is an example of very poor manners and bad upbringing by some among them.

This is an idea they’d be wise to scrap immediately.

As an aside, here’s a worthwhile (outstanding) video: