The Increasing Trend In Climate Calamities

The climate calamitologists depend on a continuous calamity supply: high temperature records, the occasional flood, forest fires, tornadoes striking cities, and hurricanes wiping out coastal areas, preferably the heavily populated. Some tropical storm Sandy damage to Staten Island will probably remain un-repaired simply because it is proximate to New York City and all the media therein. It’s very handy for photo-ops and as background for TV climate docu-drama talking heads. As everyone seems to be making money from these copyrighted pictures, none are included here.

The current spate of stories about temperature records in the western U. S. is a case in point. These temperature “records” are all produced by locations that are designed to produce temperature records. The automated station at Bad Water in Death Valley is just one example. As John Daly pointed out, and Anthony Watts reiterated, the station is backed up against a western-facing cliff, right in front of a black-top highway and centered on the black-top parking area, with a white salt pan to the west to reflect the afternoon heat. Just go to Google Street View on the highway and spin the view around. The whole area looks like a giant boy-scout solar bake-oven. Sooner or later, this spot will produce a world record high temperature, which will be publicized across the world as proof of global warming/climate change/extreme weather, or whatever the buzz-phrase de jour.

Another example is Mercury, Nevada. You don’t suppose the name refers to the local summer temperature, do you? Both weather stations there are at the airport (of course). The station next the the asphalt is the one setting records (of course). One gets tired of pointing out that all weather stations at airports are surrounded by large expanses of tarmac (Black), and little else, except the occasional taxiing jet hairdryer-on-steroids. Both airports and aircraft have increased in size during this period of “global warming.” Could there possibly be a connection? I still await that article in the approved, peer-reviewed literature.

Much has been made of natural disasters blamed on climate change. Few people point out that the opportunity for disaster has increased due to the growth of cites. Look at this picture of Texas from the ISS. 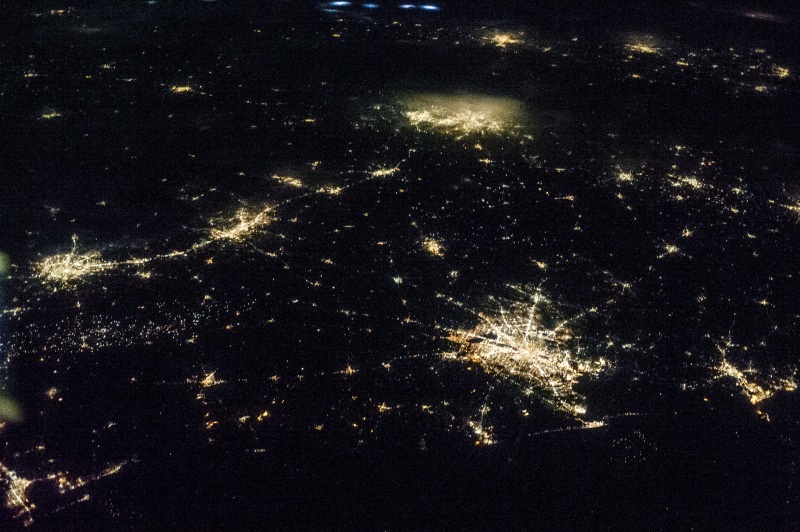 Large parts of even the huge state of Texas are now covered by city. The odds of a tornado touching down in a populated area are increasing with the development of each suburb. That path of light from San Antonio to Dallas is Interstate Highway 35. Any tornado crossing that highway appears to have about a 50% chance of striking a populated area. Only a few years ago in that area, only beef cattle and the occasional oil rig were in danger. The recent storms that caused damage in the Oklahoma City area are also examples of tornadoes in areas where only 30 years ago there was only farmland. In “tornado alley” (the American plains states) with declining tornado activity, in spite of increased detection capability, (see here), (and more data here), the increasing size of cities is insuring a steady rise in urban damage, playing right into the hands of the Calamitologists.

None of the things described above have anything to do with climate and everything to do with population and infrastructure growth. But sooner or later the economic policies followed by the West will begin to limit growth. Any decrease in urban damage will be because there less urban value to damage. Weather will still do what it normally does.

9 responses to “The Increasing Trend In Climate Calamities”