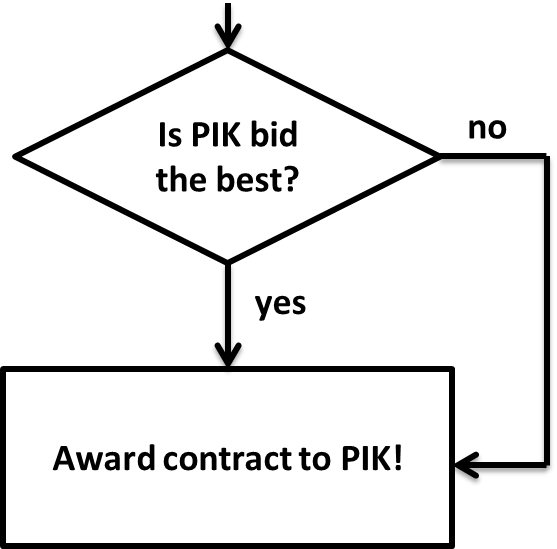 The German print weekly FOCUS has a short article on the inside workings of climate research funding (see below, right). It appears there’s a good ol’ boys network between the German Environment Ministry and the Potsdam Institute for Climate Impact Research – one that apparently violates the laws for awarding research contracts.

The title of the FOCUS piece: Umweltbundesfilz. In English: Federal environmental sleaze.

FOCUS writes that the German Federal Environment Agency (UBA) – an arm of the Federal Environment Ministry –  awarded the Potsdam Institute for Climate Impact Research (PIK) about a dozen research contracts worth some 2 million euros since 2007. According to the law, government institutes and agencies are required to publicly call for tenders Europe-wide. This was not done.

Explosive: The responsible department director of the UBA, Harry Lehmann, is a member of the ‘Verein der Freunde und Förderer des Potsdam-lnstituts’. And according to its charter, the association is to support the Potsdam Institute ‘foremost with the procurement of resources’.”

For non-German readers the quoted association’s name translates in English to “Society of Friends and Promoters of the Potsdam Institute“.

But this type of favoritism from the UBA should not surprise us at all, as blatant favoritism is nothing new for the activist agency. Just two months ago the UBA tried to tell the public which scientists and journalists to believe on the subject of climate science.

Lehmann is the author of the controversial climate change brochure where scientists and journalists were disqualified for being unserious because they were critical of the Potsdam Institute. The chief editor of research and technology at FOCUS was among those who were defamed.”

The UBA and the PIK of course deny the allegations, claiming a legal exception clause applies in the awarding of the contracts. But legal experts are most doubtful about that assertion.

The awarding practices of the UBA are ‘a massive and obviously frequent violation of the contract awarding law,’ assesses contract award law expert Heiko Höfler. The UBA defends the controversial awards and claims they fall the under the ‘award legal exemption clause’. Höfler is not convinced: ‘This is absolutely not what is intended, according to the contract conditions of the Agency. There’s a lot indicating that this is all about a lie to cover oneself.'”

In summary, the German Federal Environment Agency (UBA) is not only informing the public that the PIK is the keeper of climate science truth, but it looks like its director is illegally circumventing public contract bidding laws and funneling contracts to the PIK, to which he is member of its support society.

Nice to see journalists digging into this. Who knows what else will be uncovered in the science swamp that surrounds the PIK. With a definite pattern of inappropriate behavior becoming increasingly clear, there’s likely lots more to uncover.