Amazon UK To Release “The Neglected Sun” On September 12 With Special Price For Pre-Release Orders! 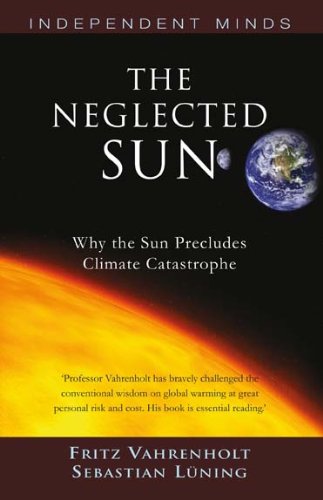 Amazon UK will release the book The Neglected Sun on 12 September and are taking pre-release orders at £10.99, a big discount to the Amazon USA price. This may be of interest to your English readers and followers in Europe.”

That is indeed a great price. For the German version I paid 25 euros last year. At the price of £10.99, you may want to think about getting copies to give out as Christmas or birthday presents.

The English version has been updated.

The German version created a wave of outrage among the warmists and one of the authors, Fritz Vahrenholt, had to get personal body guards. So do be careful being seen reading this book in public. Some Birkenstock-wearing, granola-eating planet-rescuer may attack you.

The book cites hundreds of peer-reviewed papers that the new IPCC 5AR will surely ignore.

Even though I had followed and blogged about climate science for years, this book helped fill in lots of knowledge gaps that I had earlier.

After reading the first chapter of the English version, which I’ve had the chance to see in advance, I can assure that you won’t be able to put it down. The warmists aren’t going to like this book.