The political beauty about climate data is that it can be easily manipulated in order to fool the public.

The National Oceanic And Atmospheric Administration (NOAA) recently released its State of the Climate in 2012: Highlights. To no one’s surprise, the report gives the reader the impression that warming is galloping ahead out of control. But their data show just the opposite. 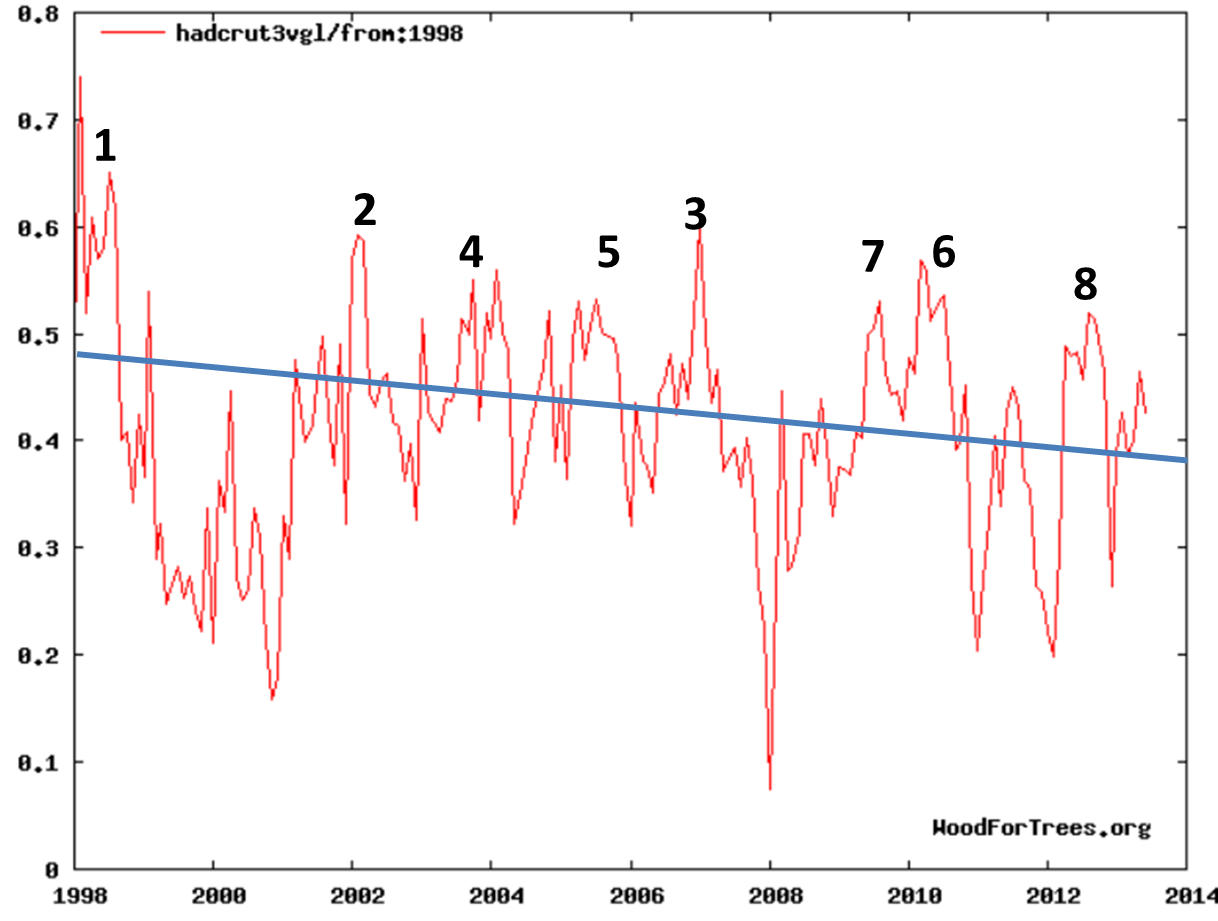 The NOAA says 2012 was the 8th or 9th warmest on record, but fails to mention it was one of the coolest of the decade, and thus confirms the cooling trend. (Above sequence estimated using the chart. Trend line is only approximate). Also see: woodfortrees.org from:1998.

When one carefully reads the report, we find that the NOAA findings actually do confirm precisely what the skeptics have been claiming all along:

1. The Earth has stopped warming.
2. The climate models exaggerated future warming. CO2 climate sensitivity is much lower than we first thought.

That’s the real issue at hand.

On global temperatures, the NOAA report itself states (my emphasis): “Four major independent datasets show 2012 was among the 10 warmest years on record, ranking either 8th or 9th, depending upon the dataset used.

2012 one of the coldest this decade

But if 2012 is only the 8th or 9th warmest and we are told again and again that almost all the warmest years occurred since 2000, then it can only mean that 2012 was one of the coolest so far this century.

And indeed the above NOAA chart confirms just that. Moreover, the stagnation of the last 15 years defies all computer model projections, thus confirming that the models all exaggerated CO2 climate sensitivity. In order for the models to be correct, the global temperature over the last 6 years would have to be 0.2 to 0.3°F warmer.

We suppose that the NOAA and NASA will soon be going to work readjusting the 1998 to 2005 data downwards to get the curve shape they need. Such dubious (and perhaps criminal) manipulation of data has long since become NASA’s “scientific” approach over the recent years. It kind of reminds us of the days when Stalin tried to change history by cutting and pasting photos.

Now that we see that the global temperature data show there’s been NO WARMING and that the models all exaggerate, how does NOAA arrive at the conclusion that the globe is warming? Answer: They use scattered weather anecdotes as evidence. Something that even 6th grade students learn not to do. Their science is that bad.

The NOAA even admits this: “The report used dozens of climate indicators to track and identify changes and overall trends to the global climate system.” These “climate indicators,” as you are about to see, are merely cherry-picked weather events.

For example the NOAA writes that the Arctic sea ice extent last year reached a record low “during the satellite era“. However, the satellite era only goes back 33 years, and the NOAA couldn’t be bothered to tell readers that low Arctic sea ice also persisted in the 1950s and is all part of natural cycles, and is thus not “unprecedented“. Also read here.

The NOAA in its report also uses a single 4-week-long period of weather over Greenland last summer as conclusive data that our planet is warming. But this is just a weather event.

Another remarkable single event that the NOAA uses is: “A weak La Niña dissipated during spring 2012 and, for the first time in several years, neither El Niño nor La Niña … prevailed for the majority of the year.” A La Niña naturally disappearing is evidence of global warming? You gotta be kidding.

Again the NOAA confuses weather events as “climate events”. The scientists at the NOAA are no longer able to distinguish between a single tropical storm like Sandy and climate. Scientific incompetence has reached a new high.

If you think scientists just couldn’t get anymore incompetent, then think again. NOAA scientists even appear to believe that cold events are now signs of warming. It includes expanding Antarctic sea ice as evidence the globe is warming:

When the traditional fundamental data stop supporting your claims and you’re scientifically desperate, then I guess you have to resort to fringe weather anecdotes. Who would have thought that the NOAA would devolve to such a low level?

And as the warming stagnation continues, expect a lot more comedy to come from the NOAA in the years ahead.