Environmentalists for years have preached that wildlife and nature needed to be protected. But today to accomplish that aim, they tell us it’s necessary to industrialize our landscape with skyscraper-size noisy wind turbines. 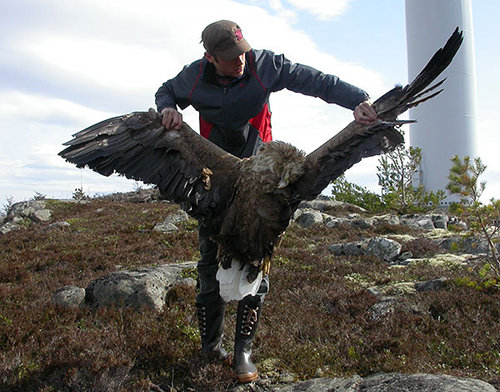 Germany’s Federal Ministry of Environment buries its own study that windmills kill wildlife on a massive scale. Photo: Espen Lie Dahl. Photo not from Germany, for illustration only.

And we warned them that the wind farms were inefficient, unpredictable, and especially deadly to airborne wildlife. That of course clashed with their climate -rescue fantasies and so they just poohed-poohed that accusation. In Germany they have since erected 25,000 turbines.

Now, just 3 days ago, the online daily Kreiszeitung here reported on a new study about the devastating impacts of wind turbines on birds and bats:

According to a study, wind turbines in Germany kill hundreds regularly, and quite possibly even thousands of bats. The study could be explosive because it could lead to limitations for the turbines. But the scientists are not permitted to reveal the details.”

Cover-up – plain and simple. According to the Kreiszeitung, the study was funded by the German Federal Ministry of Environment (Germany’s equivalent of the EPA), and was carried out by scientists of the University of Hannover.

The study showed that the wind turbines between the Alps and the coasts killed tens of thousands of bats each year.”

The Kreiszeitung also quotes experts from the Society for the Preservation of Owls (EGE) to give readers an idea of the scale of killing taking place annually:

Based on the findings if you calculate for the current 25,000 wind turbines in Germany, a quarter million bats are killed every year.”

All this is going on in a country where construction of projects are routinely shut down in Germany so that birds aren’t disturbed from spring until mid summer during the mating season.

The embarrassing, but gory details of the study are being kept under tight wraps: “The scientists assured the windpark operators anonymity in the project, in which Germany’s branch leader Enercon assisted as a partner,  in exchange for their willingness for cooperation in the study.” The EGE Preservation of Owls Society is now demanding that the publicly funded results be released so that it can be determined exactly where the flying mammals are getting killed and so that appropriate action can be taken.

The EGE is citing Germany’s Nature Protection Act which forbids the killing of endangered species. This has turned into a really messy situation for the Federal Ministry of Environment. In a law-abiding society, permit applications for the construction of windparks in such regions would have to be rejected, and existing ones curtailed, or even shut down. But in an environmental tyranny based on tampered, clandestine science, the law simply gets trampled on. The Kreiszeitung writes:

What is explosive in this case: The German Federal Ministry of Environment (BMU) supported the study with 1.1 million euros. The accusation by the EGE Owl Society is now plain to see: The federal government gives tax money for a project, from which we discover that the studied windparks possibly must be subject to new requirements so that they conform to the law. But nothing is happening.”

The study is getting swept under the carpet. My guess is that another study (a dubious corrupt one) will be commissioned and it in turn will show that very few bats are being killed after all. And in the end, should the bats end up disappearing, then they’ll just blame it on climate change.

The Kreiszeitung ends its report by reminding readers that wind energy isn’t so rosy after all:

They don’t feed in power at a constant rate and thus still require baseload power from conventional power plants. Critics fear a forest of windmills covering the landscape. And for the wind power variant of offshore windparks, a cable would have to rip through the world heritage Wadden Sea. Offshore, there are hardly any bats but the construction noise is driving the whales away.”

By now it should be clear: The biggest threat to the environment are the dishonest bureaucrats who want us to believe they are saving it.