Why Isn’t It Warming?

By now, well informed people are aware that there has been no warming for the last 16 or so years. Why should this be if CO2 has increased by 8% in that time? We are told by 97% of climate researchers, that CO2 doubling must warm us by 2 to 4.5 degrees C, so that 8% increase should have resulted in something like 0.2 to 0.3° C warming in the last two decades. Despite the best efforts of the data manipulators, that hasn’t happened. What is going on?

It has not occurred to many researchers that climate sensitivity to CO2 is not a constant. As Willis Eschenbach has pointed out in several articles, here, here, here, and most importantly, here, climate sensitivity is variable over short times, long times, and areas. It varies by time of day, being high in the morning when the sun is warming the atmosphere at the highest rate, and lower in the afternoon when rising air results in cumulus clouds and thunderstorms. It varies by latitude, being low or even negative in the tropics, where there are more thunderstorms, and higher at mid-latitudes. It is generally higher over land than over oceans, though there are extremely negative local spots over some tropical rain forests. 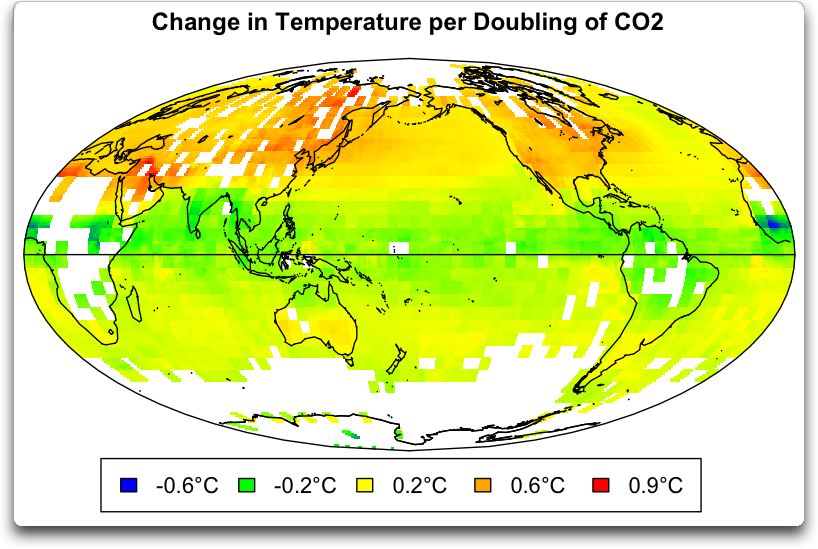 Climate sensitivity also seems to be variable over long time scales. We know that both CO2 and water vapor are involved in the process, and we know that the effect of both is logarithmic. For CO2, as it increases in the atmosphere, the effect becomes less and less. Most of the greenhouse effect takes place at concentrations less than 200 ppm.

We also know that atmospheric humidity has been decreasing as CO2 is increasing, offsetting CO2 warming with water vapor cooling. 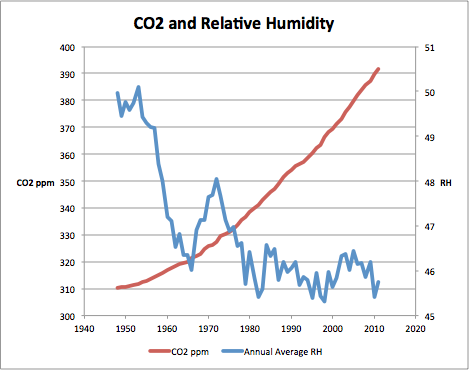 If we let MODTRAN calculate the resulting outbound long wave radiation (OLR) we see why we had cooling in the 60’s and 70’s and warming in the 80’s and 90’s. We also see the leveling in the last decade. 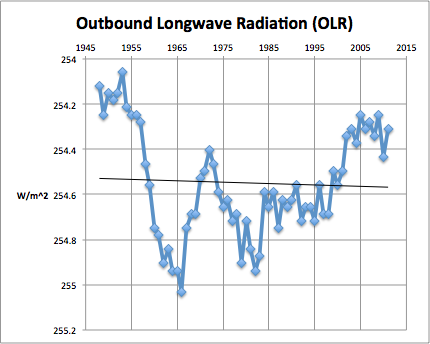 Figure 3: Computed OLR inverted so that warming is upward and cooling downward. 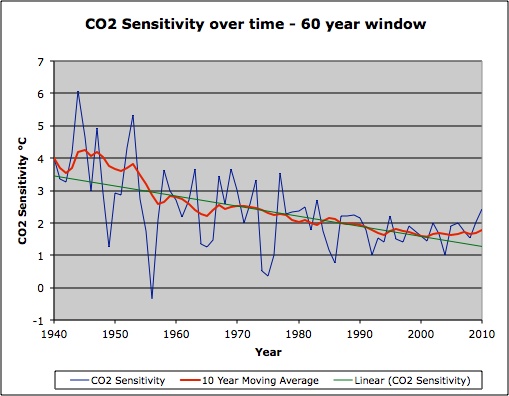 Figure 4 shows that climate sensitivity has dropped from the 3 to 4°C per CO2 doubling range in the mid-20th century to below 2°C in the 1980’s, and to the 1.6 to 1.7°C range seen today. This explains the range and decreasing values seen in recent attempts to measure climate sensitivity. Water vapor is the thermostat, not CO2.