Simply Maintaining Our Biosphere Will Keep CO2 Levels Below 450 PPM

What Are We Doing To The Biosphere?
By Ed Caryl

There have been many worried papers and articles on tropical rainforest destruction (including by this author), and this destruction’s effect on CO2 sequestration. There are countervailing forces in play, however. Tropical forests cut for “slash and burn” farming are typically allowed to return to the forest state as the soil is depleted after a few years of harvesting crops, unless the ground is reserved for permanent pasture. The crops themselves replace part of the biosphere. In temperate forests, clear-cuts are replanted. Forest regeneration typically takes from 40 to over a hundred years, but the average is probably about 80 years. An evergreen forest destroyed by forest fire that I helped replant as a Boy Scout 60 years ago was recently harvested and replanted again. Another plot in the same area that was clear-cut 90 years ago, was naturally re-seeded and harvested again three years ago. Most of that carbon was sequestered into homes. 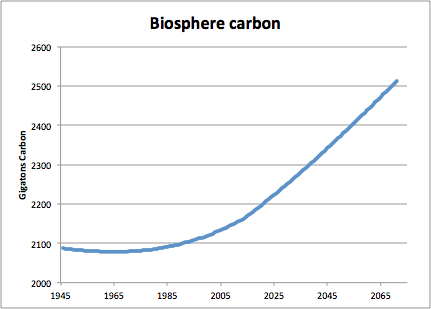 Figure 1 is a plot of total biosphere assuming 2 Gigatons forest annually burned to date and 1 Gigaton burned annually in the future, along with 15% fertilization for each 100 ppm CO2 increase, plus a 1.25% annual regrowth of tropical forests.

The result is a declining biosphere where destruction exceeds growth until about 1966. But then there is an increasing growth rate since as the CO2 level increases, where growth exceeds destruction.

The amount of carbon taken up by the oceans is another factor that is not known very accurately. The current “consensus” guess is that the ocean takes up half of the carbon that is emitted by man’s activities. Here is my attempt to chart land and ocean CO2 flux over time from 1946 to the present and projecting into the future to 2075. The resulting atmospheric CO2 is also plotted. The historical fossil carbon emissions are plotted, with a future increase to 10 Gigatons annually. The land numbers are based on the data used in notrickszone.com/ and the above 15% figure for CO2 fertilization. The ocean CO2 uptake numbers are based on this paper and are linearly projected into the future. 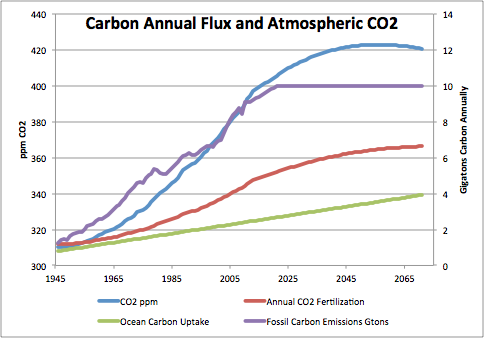 If the world holds fossil carbon emissions to less than 10 Gigatons per year, CO2 should never exceed 430 ppm, and will begin falling after mid-century. If we put modest effort into tropical forest preservation, and replanting temperate forests, along with other biome improvements, we might stop the increase at an even lower figure. We don’t need to reduce carbon emissions. We will never see CO2 doubling. No one has projected the impact of CO2 biosphere fertilization on the CO2 increase in the atmosphere. NASA has projected that CO2 will be 550 to 800 ppm by the end of the century. This could only be true if the biosphere is severely damaged by forest destruction.

Posted in CO2 and GHG | 8 Responses