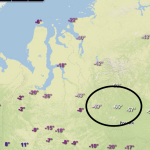 Share this…FacebookTwitterIf you think it’s cold in Canada or Minnesota, some Russians would call that mild! Chart cropped from: www.weatherbell.com/. In Central Russia the mercury has dropped to below -60°F and lower at some locations. Above the chart shows one place where it’s currently -65°F. Normally such cold is more common further east in Eastern […]

Share this…FacebookTwitterToday the online Daily Mail echos what NTZ wrote 5 days ago, and also brings in an expert to confirm exactly what I was suspecting: Prof Chris Turney may have been reckless in his planning for a major expedition. Although combining tourism and science on a cruise ship may seem like a creative idea […]

Share this…FacebookTwitterThe Irish Examiner here reports that Robert Devoy, professor of physical geography at UCC, says the greater wind speeds and flooding in Ireland of the last few days are “what we would expect from a warming climate caused by the impact of humans”. However, he cites no substantial data to support that. In fact global data […]