Environmental Activism Turns Into An Angry, Threatening Mob That Resorts To Terrifying Intimidation!

I got a news e-mail from Craig Rucker of CFACT. It turns out that the environmental movement is turning into a mob of angry, frustrated white males who go around terrifying people. Look familiar? 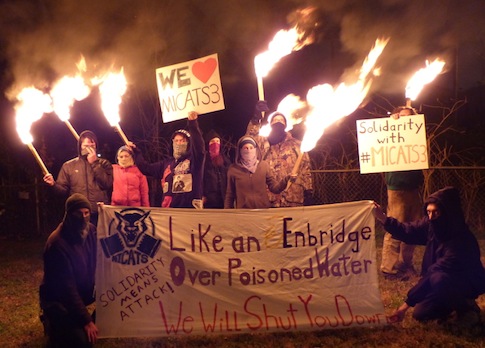 If that isn’t spreading a message of terror. Ah shucks, you mean the masked men are just holding candles that symbolize hope and peace?

Torch bearing radicals descend on pipeline executive’s private home. It’s the kind of scene we’d like to think we’d put behind us.

Yet here it is again. How would you like to look outside and see masked radicals with torches on your front lawn?

That’s what greeted Mark Maki and his family. Maki was targeted for this shameful act of intimidation because he is a member of the board of Enbridge Energy Management which works with oil pipelines.

The masked perpetrators refused to identify themselves, or their group, claiming only that they represent “the people.”

This comes at a time when both parties are coming around to the realization that pipelines are the safest, most economical and environmentally sound way to move petroleum, particularly after several bad train accidents.

The radicals are in danger of losing the pipeline issue and they know it.  Their response is to act out and threaten sabotage.

Not too long ago Marc Morano, who edits CFACT’s award-winning Climate Depot news and information service, asked an anti-pipeline protestor if they were ready to engage in “eco-terrorism.”  The protestor replied that they would do “whatever it takes” to prevent the project.  It appears now that such threats are more than mere hyperbole.  Law enforcement needs to be on alert.

The most high profile pipeline project in the country right now is the Keystone XL.  It has been the subject of years of wasteful and foolish obstruction.  It is time for President Obama to end all delays, listen to his own State Department, pick up his vaunted pen, sign his name and authorize Keystone XL once and for all.

Paul Driessen has the facts on Keystone XL at CFACT.org.  They are important.

Mister President, the time has come.  Authorize Keystone XL today.  Will you side with ignorance, radicalism and intimidation, or the economic, energy and environmental needs of the nation?

No American, no matter who they are or where they stand, should ever fear threats from masked radicals with torches outside their home again.

Such intimidation cannot be tolerated.

For nature and people too.

17 responses to “Environmental Activism Turns Into An Angry, Threatening Mob That Resorts To Terrifying Intimidation!”