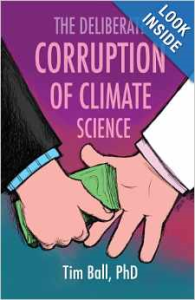 For more than a decade, the Heartland Institute has tried to explain to the public, in courteous terms, that the idea of a human-caused global warming catastrophe is a delusion, and that its proponents should not be allowed to waste the world’s economic resources through arrogant efforts to alter the planet’s climate.

Tim Ball, Ph.D., takes up the issue with strong words in his new book, The Deliberate Corruption of Climate Science. He argues, with overwhelming evidence, that in fact the global warming debate in the halls of science has been an unmitigated fraud perpetrated by people who no longer have the right to be called scientists. Their collective goals have been to…” Read more: http://dailycaller.com/uncovering-deceptions-in-the-climate-change8