Browse: Home / 2014 / May / 21 / UKIP Party About To Get Company In Brussels…German Climate-Skeptic AfD Party Rising In Opinion Polls

European parliamentary elections are slated to take place May 22-25 and parties critical of the Europe’s course on a variety of issues, ranging from the euro-currency, bailouts and climate change, are faring well at the polls and have the establishment spooked. One good example of a climate policy/science-skeptical party is the United Kingdom Independence Party (UKIP), which is now showing strong support in opinion polls. 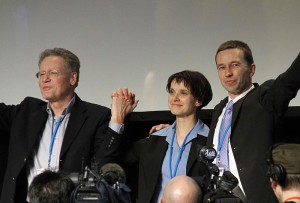 The UKIP party will soon be getting company in Europe. In Germany a newly formed party named the AfD Alternativ für Deutschland (Alternative for Germany), formed just last year, today is showing strong support, now polling at 7%, according to the Frankfurter Allgemeine Zeitung.

In general, as is the case with Britain’s UKIP party, the media have been portraying the AfD as a populist, right-wing party with suspicious leanings. But it appears the public isn’t buying that portrayal. Indeed the AfD represents a party that threatens to rock the coziness and harmony that the German establishment has enjoyed on issues such as climate and Europe. Much of the party’s support is coming from disenchanted conservative CDU/CSU and Free Democrat FDP voters, who have grown frustrated with their own parties.

I’m not a supporter of the AfD, and I’m not even familiar with their overall platform. As a US citizen I’m not even allowed to cast a vote. But one thing about the AfD party that I do support, however, is their skepticism regarding climate science and especially the country’s horribly destructive energy policy.