Browse: Home / 2014 / June / 04 / Marc Morano On EPA Action “Once You Give Them This Expanded Bureaucratic Power, There Is No Limit” 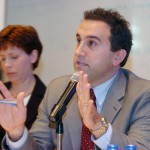 Marc Morano appeared on Al Jazeera America for a discussion round about whether the EPA bureaucratic power grab to regulate coal will have impacts on the economy and environment.

Morano compares CO2 reductions to an insurance policy, one where the premiums are far more costly than anything you’ll ever get out of it.

He also reminds that coal power plants are far more efficient and cleaner today then they used to be. Morano also warned that the underlying drive behind the Obama policy is to make energy far more expensive and that it is driven by ideology, and not science.

On the political front, Morano adds that the only climate that is going to change is the political climate, with many Democrats “running very scared of this“, saying it “could be devastating for them politically because the American public is not going to like an unelected bureaucracy taking over energy goals…” On the EPA, Morano warns:

Once you give them this expanded bureaucratic power, there is no limit.”

The other two guests on the show were fans of the EPA, and seemed to be saying: C’mon, give big government the chance to have unlimited, unchecked regulatory power, and you’ll see that it can do something good. History certainly has heard it before. Do we really want to repeat that?

2 responses to “Marc Morano On EPA Action “Once You Give Them This Expanded Bureaucratic Power, There Is No Limit””