One of the last remaining bastions of the global warming scare is sea level rise.

Unsurprisingly, a handful of alarmists are still desperately clinging to accelerating sea level rise, insisting that it is just around the corner. However a new analysis on the subject by veteran meteorologist Klaus -Eckard Puls of the European Institute of Climate and Energy (EIKE) shows that sea level rise is not accelerating, and that there are signs showing a deceleration. That bastion is on the verge of collapse.

Mörner’s results uncovered gaping differences when he compared the tide gauge results to those reported by the TOPEX/POSEIDON/JASON satellite. His conclusion:

Removing outliers of obvious uplift or subsidence, there are 182 records left, which forms a nice Gaussian distribution around a mean value of +1.65 mm/yr.

The evaluation of worldwide 182 tide gauges yields a mean secular sea level rise of 16 cm, without a GIA [Glacial Isostatic Adjustment] correction. A secular acceleration in rise was not found, and thus there is no AGW-CO2 climate signal.”

Despite the satellite measurements, naturally the tide gauge measurements were continued. And they don’t mislead in any way as they stubbornly stick to their old course of being significantly below 2 mm/year.” 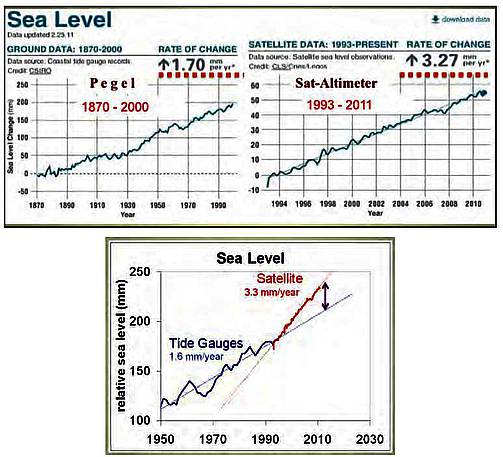 So which is right? TOPEX/POSEIDON/JASON or the observed tide gauges? Next Puls looks at the data obtained from the GRACE satellite, which show they are practically in exact agreement with the tide gauge measurement. Puls writes, citing multiple sources of peer-reviewed literature:

Both extremely different measurement methods of tide gauges [1.7 mm/yr] and gravity measurements (GRACE satellite [1.6 mm/yr]) agree with each other amazingly well at [near] 1.7 mm/yr, They are off by only a millimeter!  That leads us to the question we often find in the literature of why the TOPEX/POSEIDON/JASON satellite measurement method – the only one of all methods – yields values that are almost double.”

From this Puls summarizes at the end:

The constant stream of alarmist announcements of a supposed dramatic sea level rise now taking place and in the future cannot be confirmed. Rather it is even refuted by the measurement data. Worldwide neither the tide gauge data (200 years) nor the satellite data (20 years) indicate an acceleration in sea level rise. This is in stark contradiction to all the former and current claims of the IPCC, some institutes and a number of climate models. Moreover there is evidence that indicate the satellite data have been ‘overly corrected'[28]: “Instead of the satellite data being adjusted to match the real measured data at the surface and being adjusted downwards, there is now a discrepancy between the tide gauge and satellite measurements, unfortunately even today. And it appears to bother no one. A mysterious case.”

Puls is telling us that if you wish to have the true story on sea level rise, then look at the tide gauge data and to be very careful with the (calibrated) data from TOPEX/POSEIDON/JASON. Again some, it would appear, are playing it very loose with the data.

Overall the review by Puls is comprehensive and an English version would be extremely useful, especially for the scientists at the IPCC.