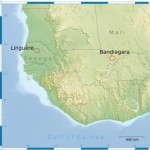 Share this…FacebookTwitterNew paper by Brandt et al on increased precipitation has been greening the Sahara since 1980. Yet another IPCC model projection that is headed off in the wrong direction. Hat-tip DkS. Press Release No. 121/2014 of the University of Bayreuth, Germany  dated 30 June 2014. My emphasis: ============== New research works show: Not global climate change alone, […]

Posted in Drought and Deserts | 2 Responses