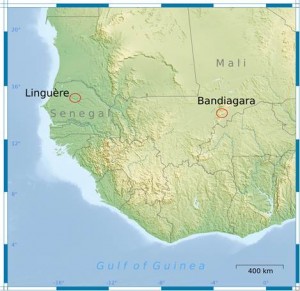 New paper by Brandt et al on increased precipitation has been greening the Sahara since 1980. Yet another IPCC model projection that is headed off in the wrong direction. Hat-tip DkS.
Press Release No. 121/2014 of the University of Bayreuth, Germany  dated 30 June 2014. My emphasis:
==============

New research works show: Not global climate change alone, but rather foremost the local actions of people impact the face of the environment

Are the earth’s deserts continuously expanding? Or is green vegetation now spreading into regions that were once barren deserts? The West African section of the Sahel zone located at the southernmost edge of the Sahara, which extends from the Atlantic to the Red Sea, has been the source of reason for a wide variety of prognoses over the recent years. Extreme periods of drought during the 1970s and 1980s were considered as indices of growing desert regions across the globe. “Desertification” was the buzzword. However, over the last two decades a rise in precipitation has been observed across the West African Sahel. As a result there has been talk about the blanket perception that “the desert is greening”.

With this controversy as the backdrop, an international research team led by geographer Martin Brandt of the University of Bayreuth examined the vegetation development in the West African Sahel more closely. High and coarse resolution satellite data as well as wide range of measurement results from the last decades enabled conclusions to be drawn on climate and vegetation trends and field research brought regional and local particularities to light. Here some determinations were made: There is no uniform development in the West African Sahel. Not only the climate but also especially various forms of land-use – farming, forestry management or village development – are mostly responsible for the way the landscape there appears, and which resources it offers the people.

In the journal “remote sensing”researchers from Bayreuth (Germany), France, Spain and the Senegal report on their results. “The activity of man on location, for example the sustainable cultivation of selected green plants or the reforestation of forests, can impact the face of the landscape considerably,” says Martin Brandt. “Such initiatives and measures by the local population are far less dependent on large-scale climatic trends than what was earlier assumed. For this reason environmental and climate research should not be one-sidedly guided by blanket buzzwords such as ‘desertification’ or ‘greening Sahel’.”

Thanks to  satellite time series analyses , the scientists were able to determine that the vegetation density in the West African Sahel increased from 1982 to 2010. This development is especially pronounced in the Senegal and in western Mali. Here there are clear regional differences with respect to plants that have multiplied over time: Not only does one observe the wild growth of trees, bushes and grass, but also foremost the expansion of crops and plants due to farm and forest management measures. In total one notices that in the West African countries, with the exception of Gambia and the Ivory Coast, the forest levels have decreased markedly even though the vegetation density has increased as a whole. 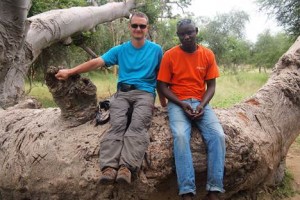 The field research work by Martin Brandt (left) concentrated on two regions: the Senegal and Mali: The region surrounding the city of Bandiagara in southern Mali has seen a complete transformation of its vegetation over the last 50 years: Many tree and bush types that were still common in the 1960s have disappeared. Periods of drought did not alone damage the plants through a lack of water, but also it was because income from agriculture fell due to poor harvests, and so the people tried to compensate by felling trees and selling lumber. However in the meantime, a vegetation-rich landscape has since appeared – and not only because the precipitation amounts have been increasing for two decades and extended periods of droughts have failed to occur. “A targeted reforestation and planting of trees on agricultural land have changed the landscape considerably,” reports Brandt, and adds: “Without a sound botanical and ecological knowledge by the local population, this development would not have been possible.”

The transformation to an agricultural landscape  was also found by the scientists from Bayreuth at another region – one located in the Senegal, north of the city of Linguère. This region is mainly settled by nomads belonging to the Fulbe ethnic group who practice intensive pasture farming. In order to feed their livestock with leaves during dry periods, they cut or fell trees and bushes during dry periods. Nevertheless, state-sponsored reforestation and protective measures have led to a considerable increase in vegetation over the last two decades and it has become more adaptable to climate fluctuations. Today three especially robust tree types make up more than 90% of the vegetation found in the region surrounding Linguère. “Alone in the immediate proximity of the city there is a fenced-in area of at least 5000 hectares on which a special species of acacia has been placed,” says Martin Brandt. However he also points to the unmistakable damage in some places arising from the overuse of the tree stock. This completely bare ground is very difficult to regenerate – an example of how intervention into the vegetation by man can be destructive when it is not approached with ecological farsightedness.

The newly published scientific results refute the claims that the West Sahel is being hit by a growing desert that is a consequence of a global climate change. However they also refute the suggestion that the “greening of the desert” will take off by itself due to the increasing annual precipitation. The moderate trend reversal after a severe period of drought indeed does entail an increase in vegetation density. But it neither means a return to the conditions that existed before these extreme climatic events, nor does it automatically mean a widespread growth of green vegetation. Moreover, anthropogenic factors – and conversely their absence – have had a decisive impact on landscape and vegetation. Targeted farm and forest management measures that are oriented on scientific knowledge can significantly foster a differentiated man-made landscape.

Martin Brandt, who will soon receive his doctorate at the University of Bayreuth, also here sees reason for hope: “Should the climate prognoses of the UN IPCC do come true, the living conditions in some arid and semi-arid regions of West Africa – foremost in the region of the Sahel zone – will worsen. Appropriate concepts for land and forest management and for environmental protection however do offer the opportunity to adapt quickly enough to such climate developments in order to soften the impacts on poeple..”

The research works in Mali and in the Senegal were part of an international project: “Climate Change, Environmental Changes and Migration: Social-Ecological Conditions of Population Movements with the Example of the Sahel Countries Mali and Senegal (micle)”. The “micle” research project was funded from 2010 to April 2014 by the German Ministry for Education and Science (BMBF) and coordinated by the Institute for Social Ecological Research (ISOE) in Frankfurt. The Geographical Institute of the University of Bayreuth – together with the Institute for Geography and Regional Research of the University of Vienna – was involved as an associated partner. The leadership of the sub-project “Physical Geographical Perspectives ” was done by Prof. Dr. Cyrus Samimi, who today leads the research group for climatology at the University of Bayreuth. Prof. Dr. Martin Doevenspeck , Professor Regional-Related Conflict Research at the University of Bayreuth, was responsible for the sub-project “Social-Geographic Perspectives”.

Photos: U of Bayreuth

Posted in Drought and Deserts | 2 Responses