Share this…FacebookTwitterThe Sun In July 2014 And Arctic Sea In Mid Summer By Frank Bosse and Fritz Vahrenholt (Translated/edited by P Gosselin) Last month the sun was variably active: The first ten days of the month were eventful, whereas the middle of the month solar activity was very calm with the negative high point occurring on […] 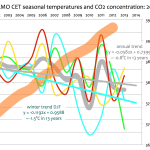 After False Reports of Sighting In Deep Oceans, Missing Heat Also Not Found In Europe!

Share this…FacebookTwitterReader Ed Hoskins sent me the following temperature graphic for Central England by e-mail. I’d say the chart says it all…linear trend of more than 6°C COOLING per century. It’s worse than we thought! Bare ground in the winter will soon be a thing of the past! Clearly temperatures have been sinking for the […]