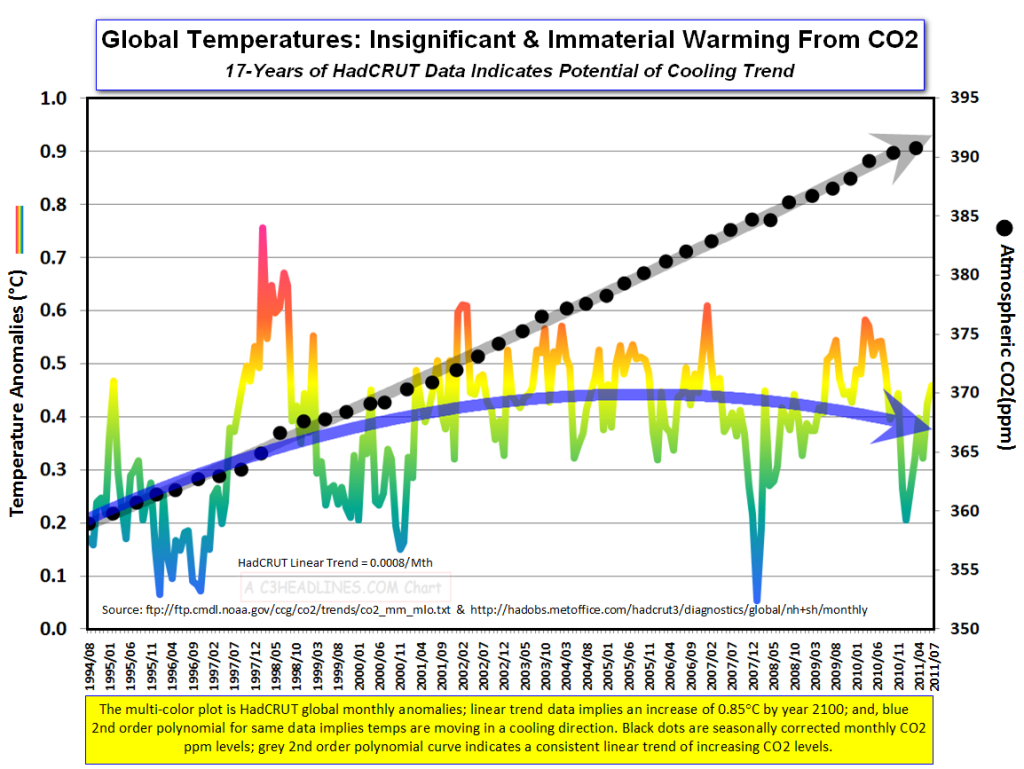 German center-left, climate alarmist daily Die Zeit here writes about the latest report from the World Meteorological Organization (WMO) which states atmospheric greenhouse gases have reached “a record high”. The results are based on data from 2013.

What is interesting about the Die Zeit piece is that it now talks about the oceans’ role on climate, which is getting more and more attention from climate scientists and the media lately. Die Zeit quotes Wendy Watson-Wright of the UNESCO Ozeanography Commission:

It is high time that in climate discussions the oceans become a central element as the driver of the global climate and dampener of climate change.”

Granted the spooked scientists are now conjuring up ideas to explain how the absorption of CO2 by the oceans could later lead to even worse climate scenarios, but here we see they are no longer able to deny the oceans’ role as they had always done before.

Die Zeit also writes that efforts by the global community to curb greenhouse gases have been fruitless so far and blames the “growing global economy” for the rising levels of CO2. Here we see the glaring paradox: More CO2 is leading to more prosperity, yet climate alarmists are always telling us the less CO2 would lead to better living when in fact it just doesn’t.

There’s also another reality that can no longer be denied. Die Zeit, perhaps unwittingly, confirms that the global community has lost interest in the futile pursuit of attempting something that is simply unachievable. It quotes a climate expert (emphasis added):

Also climate scientists such as Martin Claussen, Director of the Max-Planck-Institute for Meteorology and Professor at the Meteorological Institute of the University of Hamburg, are not surprised by the results of the report. ‘In view of the political situation and the minimal willingness to really reduce emissions, we expect nothing other than a further incrse in CO2 concentrations.'”

The movement has definitely lost steam. There’s probably reasons other than economic ones as to why politicians have lost interest in punishing voters with painful mandatory CO2 reductions. One reason seems to be that politician are increasingly becoming aware that CO2’s impact on climate had been grotesquely inflated in the first place (see chart above). Depending on the dataset used, global temperatures have not risen in over 18 years, and have actually been cooling over the last several years.

Obviously politcians are having doubts about the sustainability of the global warming scare, and are probably even relieved that they no longer have to deal with the unpopular politics of demanding that people make do with much less.

The greenhouse gas report shows us that the concentration of CO2 in the atmosphere is long way from going down. We have to reverse this trend, and reduce the emsissions of CO2 and other greenhouse gases across the board. We’re running out of time.”

Obviously many politicians have stopped listening. Almost two decades of no warming tends to have that affect.