Share this… Facebook TwitterThe Austrian online Kronen Zeitung here has an article about something most German-language media outlets have been too red-faced to report on: The sudden growth in polar sea ice. The Kronen Zeitung opens with: A huge growth in ice at the poles has surprised scientists and is casting questions. Is global warming […] 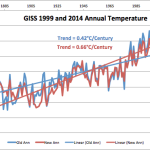 Share this… Facebook TwitterIt Is Even Worse Than I Thought! By Ed Caryl First, I must apologize for an error. In How Much Global Warming, I made an assumption about the old GISS file from 1999 that it was a global temperature file. I had missed the clear label on the file itself that it […]