Why Has There Been Global Warming? Literature Unambiguously Shows: Because It’s Entirely Normal (Stupid)!”

Why there is global warming

Let us look back in the world’s history: for example, between roughly 900 AD and 1350 AD the temperatures were much higher than now. And, back then there were fewer people, no cars, no electric utilities, and no factories, etc. So what caused the Earth’s heat? Could it be a natural occurrence? The temperature graph shows the temperatures of the Earth before Christ to 2040. 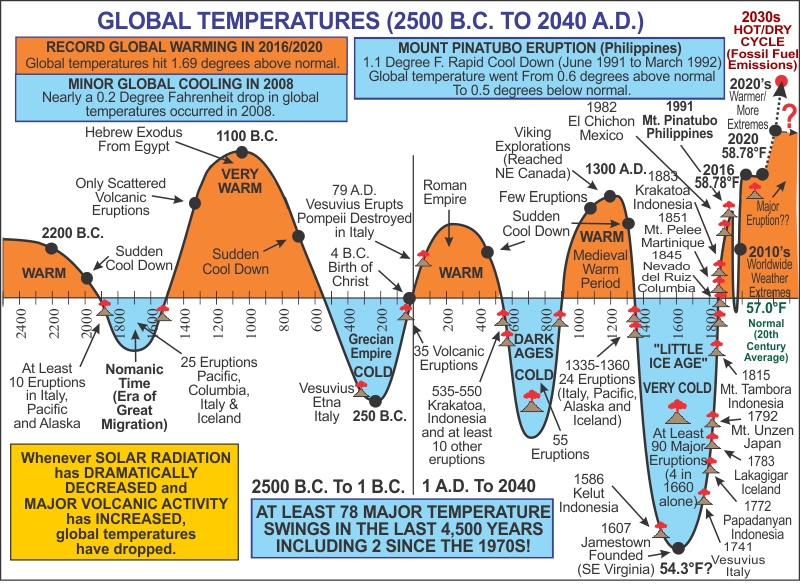 In the book THE DISCOVERERS published in February 1985 by Daniel J. Boorstin, beginning in chapter 28, it goes into detail about Eric the Red, the father of Lief Ericsson, and how he discovered an island covered in green grass.

In approximately 983 AD, Eric the Red committed murder, and was banished from Iceland for three years. Eric the Red sailed 500 miles west from Iceland and discovered an island covered in GREEN grass, which he named Greenland. Greenland reminded Eric the Red of his native Norway because of the grass, game animals, and a sea full of fish. Even the air provided a harvest of birds. Eric the Red and his crew started laying out sites for farms and homesteads, as there was no sign of earlier human habitation.

When his banishment expired, Eric the Red returned to congested Iceland to gather Viking settlers. In 986, Eric the Red set sail with an emigrant fleet of twenty-five ships carrying men, women, and domestic animals. Unfortunately, only fourteen ships survived the stormy passage, which carried about four-hundred-fifty immigrants plus the farm animals. The immigrants settled on the southern-west tip and up the western coast of Greenland.

After the year 1200 AD, the Earth’s and Greenland’s climate grew colder; ice started building up on the southern tip of Greenland. Before the end of 1300AD, the Viking settlements were just a memory. You can find the above by searching Google. One link is: www.greenland.com/en/about-greenland/erik-den-roede.aspx.

The following quote you can also read about why there is global warming. This is from the book EINSTEIN’S UNIVERSE, Page 63, written by Nigel Calder in 1972, and updated in 1982:

The reckoning of planetary motions is a venerable science. Nowadays it tells us, for example, how gravity causes the ice to advance or retreat on the Earth during the ice ages. The gravity of the Moon and (to a lesser extent) of the Sun makes the Earth’s axis swivel around like a tilted spinning top. Other planets of the Solar System, especially Jupiter, Mars and Venus, influence the Earth’s tilt and the shape of its orbit, in a more-or-less cyclic fashion, with significant effects on the intensity of sunshine falling on different regions of the Earth during the various seasons. Every so often a fortunate attitude and orbit of the Earth combine to drench the ice sheets in sunshine as at the end of the most recent ice age, about ten thousand years ago. But now our relatively benign interglacial is coming to an end, as gravity continues to toy with our planet.”

The gravity of the Moon and (to a lesser extent) of the Sun makes the Earth’s axis swivel around like a tilted spinning top. Other planets of the solar system, especially Jupiter, Mars and Venus, influence the Earth’s tilt and the shape of its orbit, in a more-or-less cyclic fashion, with significant effects on the intensity of sunshine falling on different regions of the Earth during the various seasons.”

Read below about carbon dioxide, which we need in order to exist. You can find the article below at: www.geocraft.com/ice_ages.html.

– Of the 186 billion tons of carbon from CO2 that enter the Earth’s atmosphere each year from all sources, only 6 billion tons are from human activity. Approximately 90 billion tons come from biologic activity in earth’s oceans and another 90 billion tons from such sources as volcanoes and decaying land plants.

– At 380 parts per million CO2 is a minor constituent of the Earth’s atmosphere–less than 4/100ths of 1% of all gases present. Compared to former geologic times, the Earth’s current atmosphere is CO2-impoverished.

– CO2 is odorless, colorless, and tasteless. Plants absorb CO2 and emit oxygen as a waste product. Humans and animals breathe oxygen and emit CO2 as a waste product. Carbon dioxide is a nutrient, not a pollutant, and all life– plants and animals alike– benefit from more of it. All life on Earth is carbon-based and CO2 is an essential ingredient. When plant-growers want to stimulate plant growth, they introduce more carbon dioxide.

– CO2 that goes into the atmosphere does not stay there, but continuously recycled by terrestrial plant life and earth’s oceans– the great retirement home for most terrestrial carbon dioxide.

– If we are in a global warming crisis today, even the most aggressive and costly proposals for limiting industrial carbon dioxide emissions and all other government proposals and taxes would have a negligible effect on global climate!

The government is lying, trying to use global warming to limit, and tax its citizens through “cap and trade” and other tax schemes for the government’s benefit. We, the people, cannot allow this to happen.

22 responses to “Why Has There Been Global Warming? Literature Unambiguously Shows: Because It’s Entirely Normal (Stupid)!””