Browse: Home / 2015 / January / 13 / Weather Instrumentation Debacle? Analysis Shows 0.9°C Of Germany’s Warming May Be Due To Transition To Electronic Measurement

Yesterday I wrote a post about how a 44-year veteran German meteorologist poured cold water on the hypothesis of a man-made global warming and pointed out that a change in temperature instrumentation is probably behind much of the reported warming that Germany has supposedly seen since the 1980s.

Klaus Hager also has a website. At this website he posted a meteorological bulletin, which he authored and was published as an annex to the Berliner Wetterkarte (Berlin Weather Chart).

That bulletin was about the results of his eight and a half year study where he compared in a side-by-side test the former glass mercury thermometers with the newer electronic thermometers, which were installed during the 1980s and 1990s by Germany’s DWD German Weather Service.

Earlier temperature measurement was done using a mercury/alcohol glass thermometer, where readings were taken ten minutes before each hour. The daily mean temperature was computed using the “Mannheimer” hourly values 07h, 14h, and 2 times 21h, all divided by 4. The DWD used this formula until March 31, 2001. The extreme temperatures were read at the glass thermometer at 7 a.m. as the low, and 9 p.m. for the maximum. Temperature was measured inside an “English” weather hut.

The new electronic system, however, employs a completely different sensor technology, known as the Pt 100, where temperature is measured with two measurement sensors that check each other. Each second a value is generated and measured for an entire minute, i.e. minute mean. The daily mean temperature is calculated from 24 values, each at 10 minutes before the hour (e.g. at 8:50 for 9 a.m.) The extreme is calculated from the minute mean values between 00 h and 24h. Today they are recorded inside a plastic hut with slats (at first made of aluminum).

Hager writes that although electronic sensors and the comprehensive IT networking implemented by the German DWD Weather Service do offer many advantages, there are also a number of disadvantages which he says are of importance with respect to assessing climate change, especially when comparing old datasets from the mercury thermometers to the new datasets recorded by the electronic sensor technology. He writes that it’s close to comparing “an apple and an orange”.

Hager compared the two different measurement systems side by side at the GeiInfoAdvisory Office of Fliegerhorst Lechfeld from January 1, 1999 to Jul 31, 2007. The following is a plot of the differences between the two measurement methods: 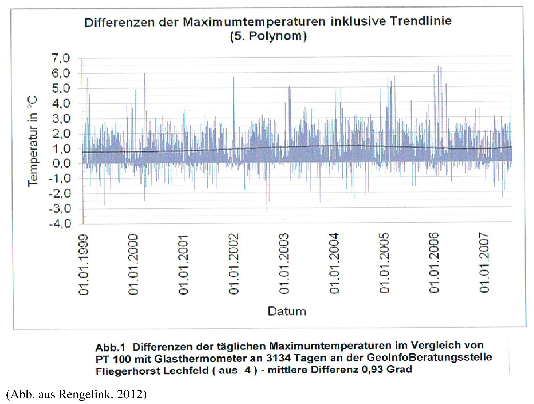 Figure 1: Differences in the daily maximum temperatures from the Pt 100 compared to glass thermometers for 3124 days (ca. 8.5 years) conducted at the GeiInfoAdvisory Office of Fliegerhorst Lechfeld (from 4) – mean difference 0.93°C.  Figure from Rengelink, 2012)

Worse, Hager says, the German DWD Weather Service did not adequately investigate the two different measuring systems and compare them, writing that:

Although the DWD set up so-called climate reference stations at (way to few) locations and published the studies from the comparison measurements, the results unfortunately were not satisfactory. Here not the “old data was compared to the new data”, instead only the electronic thermometer was investigated in various locations, but were not compared with the glass thermometers, which are readily at hand.”

Hager provides an example illustrating why one must be very wary when comparing data from the new electronic instrumentation to data taken from the old mercury thermometers. The following chart depicts an example comparison for the temperature measured using the two different methods on a single day, 12 November 2005: 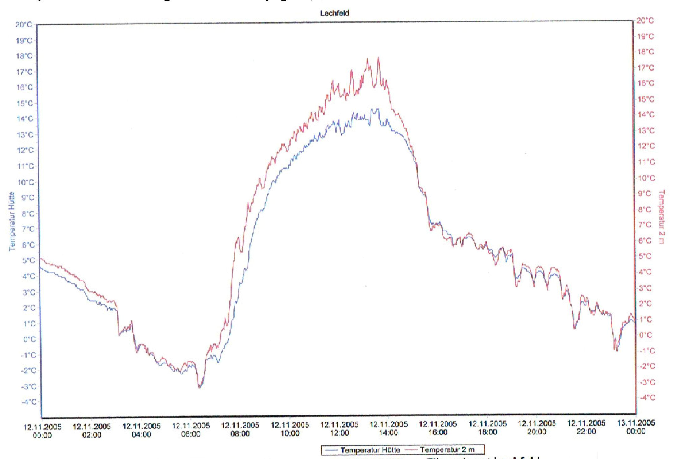 Differing daily measured values from the old and new sensors for temperature measurement spurred the author [Hager] to conduct a comparison spanning from January 1, 1999 to July 31, 2006 at Fliegerhorst Lechfeld (WMO 10856) 8-1/2 years long, daily without interruption, among other comparison tests of mercury maximum glass thermometers in a Stevenson screen and a Pt 100 resistance thermometer inside an aluminum enclosure, both unventilated. The 3144 days yielded a mean difference of +0.93°C; the Pt 100 was higher than the mercury thermometer. The maximum daily difference even reached 6.4°C!

You can see the maximum difference in Figure 1, occurring in early 2006.

Hager attributes the wide range of differences on factors such as cloudiness, sunshine duration, wind speed and air mass changes. The results, Hager writes, show that:

Earlier measured values cannot be compared to the values measured today for longer term temperature datasets without having interruptions in the overall dataset.”

Not only is the temperature sensing method very different than it was before, Hager writes that also the method for determining the daily mean temperature is different and thus another source of discrepancy. Earlier the “Manheimer” hours (7h +14h + 2 times 21h divided by 4 was used. Today the daily mean is comprised of 24 hourly values from 00 h to 23 h divided by 24.  “This too falsifies the quality of the recorded values,” writes Hager.

This all should give the current science something to think about, because actual practice tells us that there is a necessary rethinking when it comes to the theoretical and numerical approaches used for assessing the swings in climate.”

Disadvantages
– Lack of comparability between the old measurements and those of the new sensors.
– Thermometer: formerly glass thermometer, today Pt 100 sensor.
– Precipitation measurement unit: formerly Hellmann pan, today with the teetering unit or the new weight measurement of precipitation.
– Humidity: formerly using the hair hygrometer, today it is the dew-point sensor or capacitive sensor.
– Wind speed: formerly using the cup anemometer, today with an ultrasound unit.
– Snow depth measurement: formerly measured by hand, today with laser or ultrasound device.
– Precipitation type and weather appearance of snow, rain, hail, and cloud observation are done by visual observation.
– Increased maintenance requirements for the sensors done by a maintenance center.
– Sensor downtime of various types with disruptions in the climate dataset.
– Onset of measurement techniques through other evaluations of daily means, see: Temperature Measurement at the DWD “Formerly and Today”.

16 responses to “Weather Instrumentation Debacle? Analysis Shows 0.9°C Of Germany’s Warming May Be Due To Transition To Electronic Measurement”