According to the news (the Associated Press, Seth Borenstein) 2014 is the hottest year on record. His numbers come from NOAA and NASA, so of course they are correct (sarc off).

Several things are left out of most of the discussions on the relative warmness of 2014: 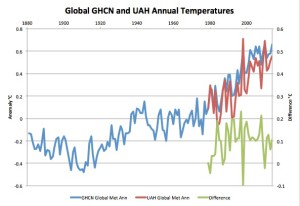 Figure 1 is the latest GHCN and UAH Meteorological Year (December through November) data, along with the difference plot when the data are matched (normalized) at 1979.

In Figure 1, except for El Niño years, satellite data is not warming nearly as fast as the GHCN global data. The difference is now averaging more than 0.1°C.

GHCN is constantly changing their data. Every time they get new data, they completely recalculate the whole database all the way back to 1880. This gives ample opportunity for confirmation bias to adjust the numbers. Here is an example. I had downloaded the global data last September, with numbers updated through August. Just now, I downloaded the current data with the numbers through December, completing both the meteorological and calendar years. Here is a chart of the monthly differences between the two data sets for the last 17 years Beware. This data will change every time they get new data and recalculate. The chart shown was from data downloaded at 1 PM eastern time on January 18th, 2015, today. It is different from the data I downloaded last Friday. 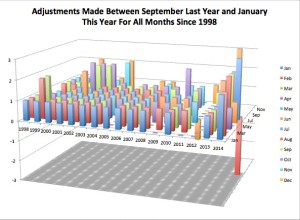 Figure 2 is a plot of the changes in GHCN data for all the months since 1998 up to August of last year. The vertical scale is in 1/100 degree C.

The changes are small, but they are nearly all in one direction, warmer. One would think that data corrections would be in both directions, some warmer, some cooler, but in the last 17 years, a total of 200 months, only three months were corrected in the cooler direction. Note that in the last year the corrections were mostly in the warmer direction by .02° or more. Only one, August in the September update, was cooled. It was completely offset by the July change. All the changes in the first six months of 2014 were sufficient to make 2014 the warmest calendar year.