Charting the costs and effectiveness of renewable energy in Europe

A comparison of both the capital cost and energy production effectiveness of renewable energy in Europe.
By Ed Hoskins
(Some editing by P Gosselin)

The diagrams below show the cost and capacity factors of the major European renewable energy power sources: onshore and offshore wind farms and large scale photovoltaic solar generation. They are compared to the cost and output capacity of conventional gas fired electricity generation. 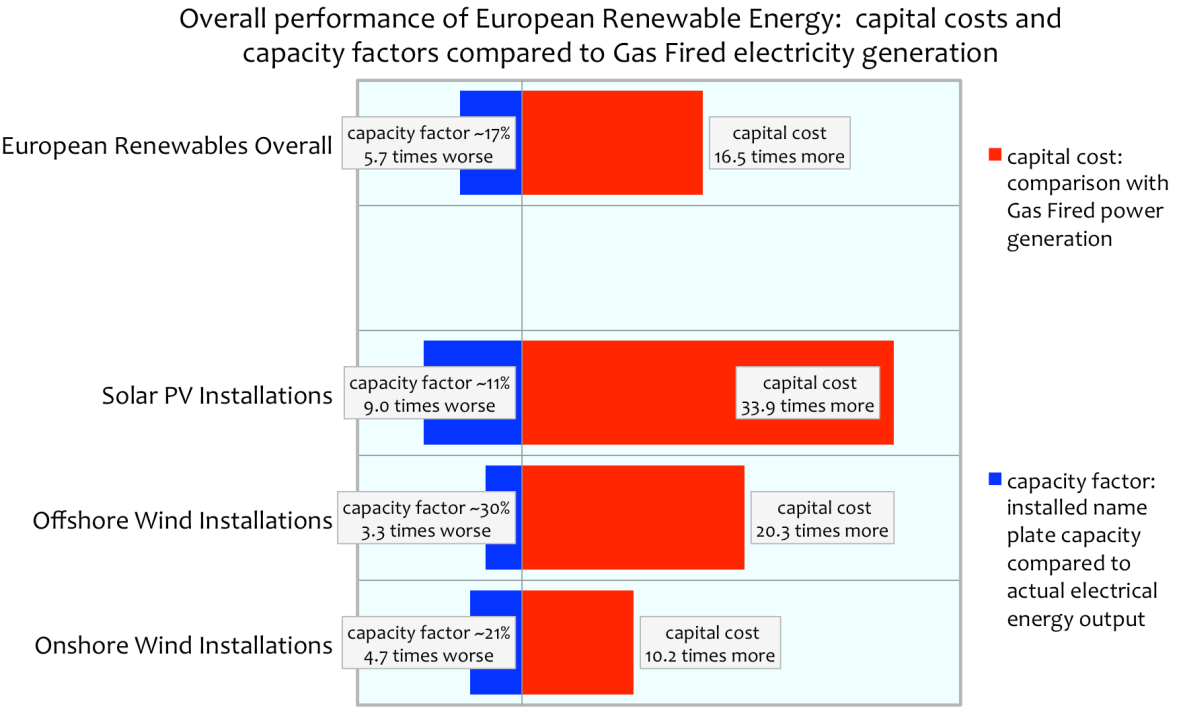 In all the capital costs expended by 2013 in Europe amounted to some €1/2 trillion for approximately 170 gigawatts of “nominal” installed renewable energy generation. But because of the reduced capacity factor, those installations provide only approximately 30 gigawatts of real output electrical power.  That output amounts to only about 2.9% of the total European generating capacity of 1024 gigawatts [1].

The following is a table summing up performance of the various wind and solar sources. The

In addition, electrical output of renewable energies wind and solar power is intermittent and non-dispatchable. Their output cannot respond to electricity demand as and when needed. Energy is fed into the the grid in a haphazard, almost entirely random manner – depending on the weather, time of day and season.

In short, it is inefficient, exorbitantly expensive and often unavailable when it is needed, or severely excessive when it isn’t needed. It offers everything that makes a modern economy uncompetitive.

When it comes to wind and solar power, onshore wind power is the most effective form of renewable energy in terms of capital cost. It only costs approximately 9 times as much as conventional power generation. On average across Europe, the capacity utilization is about 23%.

Offshore wind power is about 17 times more expensive to install, but its increased capacity factors mean that it should be significantly more productive than onshore installations. Nonetheless, in addition to the significant additional capital costs, offshore wind power appears to have major problems with costlier long term maintenance and questionable reliability [4].

In addition to the impacts of cloudy weather, photovoltaic units are susceptible to performance degradation from ice or snow, or obscuration with accumulating dust in drier climates. Solar power might operate reasonably well at mid latitudes, but it is inevitably a poor investment in Northern Europe where yields are low because of latitude, adverse weather, the seasons and the daily rotation of the Earth.

Though the cost of the technical photovoltaic elements of the systems are reducing, these high-tech elements are becoming an ever smaller part of the final installation. The costs of the support infrastructure and linkages to the grid are irreducible. It is also clear that the service life of solar cells is limited, and degrades over time. System degradation of the DC to AC inverters is particularly significant:  they are an expensive element in any solar system with a limited operational lifetime.

In summary the following analogy describes the nationally mandated use of renewable energy:

By law a family has to purchase two cars: one works well all the time, is cheap to buy, cheap to maintain and does not cost too much to run. But the other is very expensive to buy and only works about 1/6th of the time. However the fuel costs are very low. But by law the family is forced to use the expensive car if it is working even though it may well let them down at any time. At the same time the cheap car must be kept idling, using fuel but doesn’t go anywhere.

19 responses to “Analysis Shows Wind And Solar Power In Europe Is On Average 16 Times More Expensive Than Gas-Fired Power!”