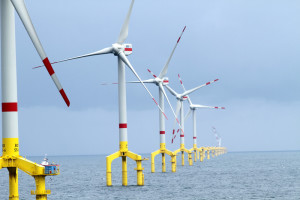 Face it. When it comes to environmental protection, the EU can be awfully strict. Drop just a single molecule of something hazardous out somewhere in nature, and expect it to be treated like the crime of the century. That’s the way it usually is with eco-bureaucrats, except of course when it comes to green energies like ugly wind turbines. There everything suddenly has no real environmental impact, and so they get a free pass.

With the continued expansion of wind parks out to sea, over the coming decades thousands of tons of toxic metal compounds will be brought into the North and Baltic Seas. The reason is the use of so-called sacrificial anodes. These are for preventing the corrosion of the steel bases of the wind parks.

Spiegel describes how these sacrificial anodes, which contain heavy metals, dissolve over time in the water and that no environmental impact study has ever been conducted. According to Spiegel just the interior corrosion protection of each steel tower will dump up to ten tons of aluminum over its 25-year lifetime. Yes, “each tower”!

With plans to install 6500 turbines out to sea by the year 2020, Spiegel calculates that this means 13,000 tons of aluminum rubbish could end up in the North Sea.

The German weekly also writes that the electrical method of corrosion protection, such as that used on ships, is also possible, but that the method is too expensive due to “higher maintenance requirements”. After all, wind power is already unaffordable enough!

So in Europe are 13,000 tonnes of chemical rubbish getting dumped into the sea anything to really worry about? Obviously not if they comes from “green” sources.

42 responses to “Emerging Environmental Scandal: “Thousands Of Tons Of Toxic” Wind Park Rubbish To Get Dumped At Sea!”