The CO2 concentration in the atmosphere has been steadily increasing since regular measurements began at the Mauna Loa Observatory. This increase is partially driven by fossil fuel use but the year to year rate of increase is driven by ocean temperature. This was discussed in October 2012 here. 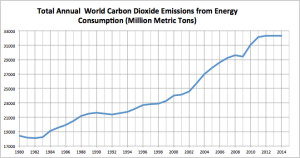 Figure 1 is a plot of annual world fossil fuel CO2 emissions since 1980 from IEA.

In that time, CO2 in the atmosphere has grown from 338 parts per million (ppm) to 398 ppm. In the next figure, that quantity has been converted to metric tonnage. 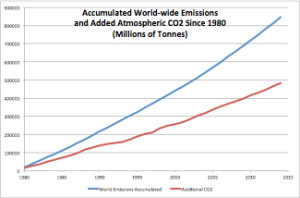 Note that only about half the emissions have stayed in the atmosphere. The remainder has been absorbed somewhere else. 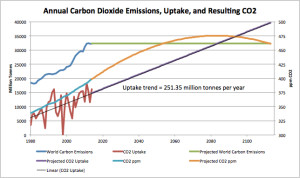 Figure 3 is a plot of annual Carbon Dioxide emissions, the annual uptake by the biosphere, and the resulting atmospheric CO2 concentration, with projections of each into the future.

Figure 4. Estimated changes in vegetative cover due to CO2 fertilization between 1982 and 2010 (Donohue et al., 2013 GRL). For a discussion of this image and other similar images see Roy Spencer here.

The “somewhere else” is the biosphere, the “greening” of global photosynthetic life along with absorption by the oceans. Each year, on average, those sinks take up 251.35 million extra metric tonnes of CO2 as the biosphere pulls things back into balance. That sounds like a lot, but keep in mind that the atmosphere contains more than 3 trillion tonnes of CO2, land based vegetation about 4 trillion tonnes, the surface ocean something like 5 trillion tonnes, and the deep ocean 150 trillion tonnes. The total annual flux from atmosphere to the biosphere and back is about 400 billion tonnes. So that annual difference is only about 0.5%. (I am using the American counting system: 106 is a million, 109 a billion, 1012 a trillion. I’m also using the weight of CO2, not just the carbon atoms.)

If this increase holds, and the global fossil fuel emissions remain constant at the same level as the last four years, the uptake will equal the emissions late in this century, in about 2083. At that time, CO2 in the atmosphere will reach a maximum at about 475 ppm and begin to decrease. In my humble opinion, this projection is pessimistic. If emissions are reduced below the current level, the date and level of the maximum will be earlier and lower. If ocean temperatures decrease, the same thing will happen. If warming occurs, and/or emissions increase, the date of the maximum will be pushed toward 2100, and the maximum level will be slightly higher. Ocean temperature is a positive feedback on CO2 increase and a negative feedback on CO2 uptake. A cooler ocean takes up more CO2, a warmer ocean less.

The current policies in most developed countries are toward lowering emissions. To date, these policies have been successful in holding emissions at the current level for the last four years. If governments allow the development of nuclear power, other renewables increase in a non-destructive fashion, and if natural gas continues to replace coal-fired power plants, carbon dioxide emissions will likely fall below the current level. This will pull the CO2 peak to an earlier date and a lower level. That date is where emissions cross the uptake trend line. Here is my optimistic view: If emissions fall back to the level of the year 2000 by 2050, looking at Figure 3, one can imagine that the CO2 level will peak at about 450 ppm near that year and fall after that.

What will this do to global warming? The slight increase in CO2 induced warming might just offset the coming sun-induced cooling. Perhaps we will have a century of constant temperature.

89 responses to “CO2 Emissions Have Been Flat For Four Years. What Does This Mean For The Future?”