Browse: Home / 2013 / October / 05 / Carbon Dioxide Will Cease To Be a Problem As Biosphere Absorbs Increasing Amounts Of CO2

Carbon Dioxide Will Cease To Be a Problem
By Ed Caryl

We do have the real world measurements of CO2, resolved to a monthly measurement with a well established seasonality that I will not describe here. We also know fairly accurately how much carbon we are injecting into the atmosphere from fossil sources. 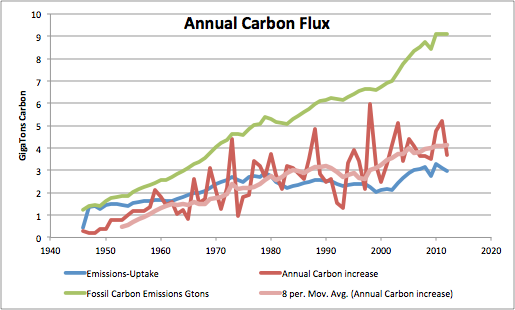 In Figure 1, the blue trace (fossil carbon emissions with all the biospheric carbon uptake subtracted) should equal the red trace, and in the long term average (pink trace), it comes close, so our simple model is reflecting the real world in that half the carbon emissions are being taken up by the ocean and the biosphere. The other half is contributing to the atmospheric CO2 increase. The difference between the pink and the green curves in 1977 is about 2.5 Gigatons and is increasing at an ever faster rate. The current difference is about 5 Gigatons. An increasing amount of CO2 is disappearing into the biosphere.

The part that remains is called the “air-borne fraction”. If this part is charted as a percentage you get a plot that looks like this (from James Hansen’s paper here. His Figure 3, is my Figure 2. Hansen’s caption is quoted. 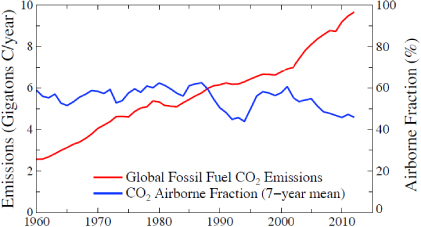 I duplicated Hansen’s figure in the next figure, extended, and showed the un-averaged data. The heavy red trace is Hansen’s blue trace above: 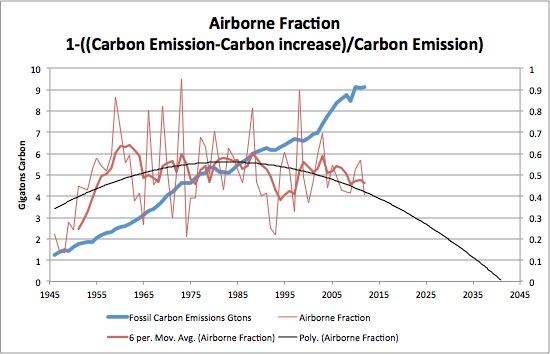 Note in Figure 3 that the airborne fraction of fossil-fuel carbon polynomial trend line goes to zero in about 30 years. When this happens, atmospheric CO2 will stop increasing. This roughly agrees with the atmospheric CO2 increase ceasing in mid-century as found in the previous article.