The IPCC AR5 Summary for Policymakers was released at the end of September, followed some days later by the Working Group 1 Report. The press directed much of its attention to sea level rise, as this magnitude was corrected upwards compared to the last 2007 report.

But the media gave  little attention to the expected temperature increase until 2100 for the various scenarios. Let’s take look at the temperature scenarios of the 2013 report and compare them to those of 2007. Taking a closer look we see a less alarmist picture than what we are told about sea with sea level.

Compared to the IPCC report of 2007, the range for projected temperature for the various scenarios until 2100 were corrected downwards by almost a full degree Celsius in the 2013 report. This is clearly depicted by the side-by-side comparison of the two charts from the respective 4th and 5th climate reports: 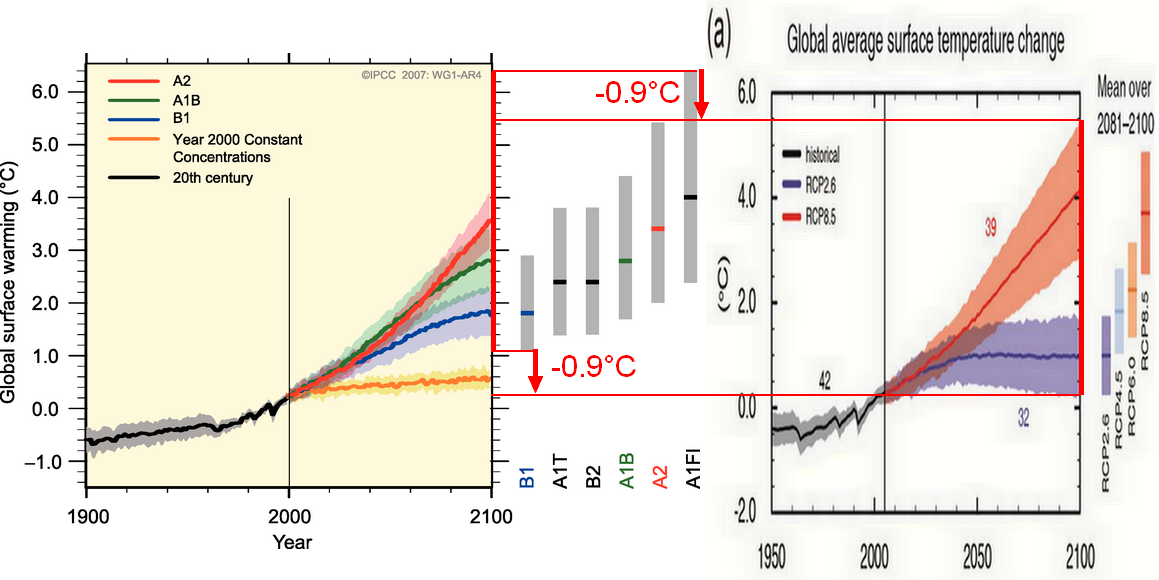 Because this is now a less alarming scenario and contradicts the notion of a more rapidly warming world, the media likely shifted their focus over to sea level rise.

In the following comparator the red arrow shows how the range for the temperature scenarios for 2100 was corrected downwards approx. 0.9°C. The latest range starts with a temperature that barely rises over the next 87 years, thus assuring in the future that climate scientists will always be able to say their models were right.

This downward correction was never presented as good news, and the media continue spreading fear and horror.

And with the temperature scenarios being corrected downward, one would logically think that sea level rise would also be less than projected in 2007. But the IPCC sees that in the opposite way. Instead of correcting sea level rise downwards, it jacked them up. Obviously there’s a lot of confusion about the climate system.

Also the absence of global warming over the last 15 years has been insufficiently communicated by the IPCC and the press. Here it is best keep quiet about it rather than uncovering and informing the public.