The Atlantic Multidecadal Oscillation (AMO) is defined as the variability of the North Atlantic sea surface temperature compared to the rest of the global ocean from 60°N to 60°S once trends are removed. The AMO high is usually seen off eastern Canada and north and east of Iceland. The AMO low has the pattern reversed. Compare those areas in Figure 1 with Figure 3.

The Pacific Decadal Oscillation (PDO) is defined as the difference between the Northwest Pacific surface and the eastern Pacific surface temperature north of the equator. Figure 1 and figure 2 show the two phases. Both the PDO and the AMO affect the weather in the Northern Hemisphere. Both show up distinctly on anomaly maps. The GISS anomaly map found here was used to produce these figures.

There are four ways these patterns can interact. Each of these four ways result in distinctly different patterns. Beginning with the most recent pattern, from last February, that buried New England in snow, when both the AMO and the PDO were high. 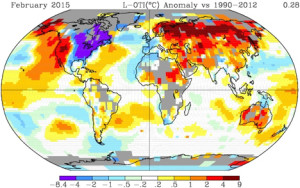 In Figure 1, the western Pacific north of 20°N is cool, and the eastern pacific off the West Coast of the U. S. is warm. This makes the Western U. S. very warm. The jet stream has a huge loop diversion north past Alaska and south over the eastern U. S. all the way to Florida. This is the pattern when both AMO and PDO are high.

In contrast in November 2011, when AMO was high and PDO was low, the pattern changes to Figure 2. 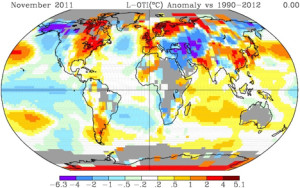 In Figure 2, note that the Pacific temperatures are now reversed, the western Pacific is warm and the eastern Pacific off the U. S. coast is cool. This reverses the continental pattern with the West cool and the East warm. Note that the pattern over Europe and Asia is also reversed. This pattern filled the California reservoirs and buried Alaska in snow.

Figure 3 is the pattern when PDO and AMO are both low. 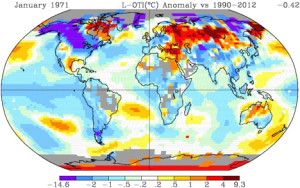 In Figure 3, both patterns were very low. Temperatures were very low over the entire Arctic and most of Canada and the northern U. S. This was during the ice age scare of the 1970s. 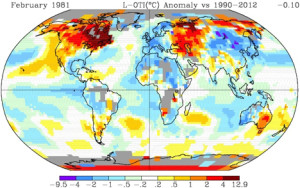 Figure 4 illustrates the conditions just ten years later in February of 1981. PDO was high and AMO was still low. The western U. S. and all of Canada was warm and Europe was cool. Each land mass is responding to the adjacent sea temperature.

These cycles affect the food chain as well as the weather. Salmon stocks in the Pacific North-west rise during the cool phase of the PDO, and fall during the warm phase. In  similar fashion, Atlantic Salmon stocks follow the AMO, rising when the AMO is cool and falling when it is warm.

The recent spike in the PDO is temporary. The warm “blob” off the U. S. west coast will move south with the North Pacific/Japan/Kuroshio/California Current and be replaced by the cooler water behind it. The peak was reached in December and has fallen since then (as of March). The PDO data is available here. AMO data is available from NOAA, here.

As both the AMO and PDO affect Northern Hemisphere temperatures, and extremes are reached when both are in the same phase, it does make sense to combine them as I did in my last post on What Caused the Pause or Why Hate The Hiatus?

These cycles are weather. They can also be called natural climate cycles. They have nothing to do with CO2, and everything to do with driving many of the climate features that are gleefully pointed by climate alarmists. They determine the snowstorms, heat waves, floods and droughts pointed out by the alarmists as indications of “Climate Change”.

11 responses to “AMO And PDO Directly Affect The Weather, CO2 Does Not”