The German renewable energy bubble has collapsed since the government rolled back subsidies for a variety of green energy sources such as solar and biogas in 2014. Especially for solar.

German alarmist website klimaretter.de here reports that solar energy installations have reached a new 8-year low. According to the BDI German Federal Power Agency, in February this year only 100 megawatts of capacity were installed. This is 11% less than what was installed a year earlier, and much less than during the heydays earlier in the decade.

In 2014 the German government reformed its EEG energy feed-in act with the aim of limiting the annual amount of added solar capacity coming online to between 2400 to 2600 megawatts. Last year not even 1900 megawatts were added, klimaretter writes.

As the solar industry collapses in Germany, it is however faring much better worldwide, with USA and China leading the way in adding capacity. Experts expect between 53,000 and 57,000 megawatts of solar capacity to be added globally this year. 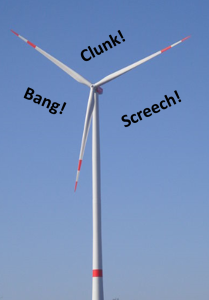 Meanwhile a wind turbine was temporarily shut down when nearby residents heard loud, clunking noises for days and then found several 4-inch, quarter-pound stray bolts on the ground in western Germany near the border to France (see photo at link that follows.

According to the online volksfreund.de site, a repair crew was dispatched to repair the problem. Apparently there was “damage to the brake system that serves to arrest the rotor blades”. One of the screws fell inside the blade and caused the racket.

The local environment ministry reports that the problem has been solved and there is no longer any danger to residents.

Good thing no one was near when the damn bolts fell out!