The Deutsche Wetterdienst (German Weather Service), DWD, released a bulletin providing background information on a cold front that passed through the country last Tuesday and unleashed some severe storm activity.

In the East German town of Bützow a tornado even touched down and caused severe damage and dozens of injuries.

To give an idea of how intense the front was, the following chart shows the temperature drop in Hamburg brought on by the front’s passage:

Although tornadoes in Germany are nowhere near as common as they are in the USA, it is not unusual for them to occur from time to time. But when they do occur, the media and some dubious climate and weather “experts” are quick to hint that they are extreme weather events associated with man-made climate change.

So are tornadoes really becoming more frequent in Germany?

Although the DWD German Weather Service has not been tracking tornadoes that long, the data so far do not show any increase in activity over the past 15 years. 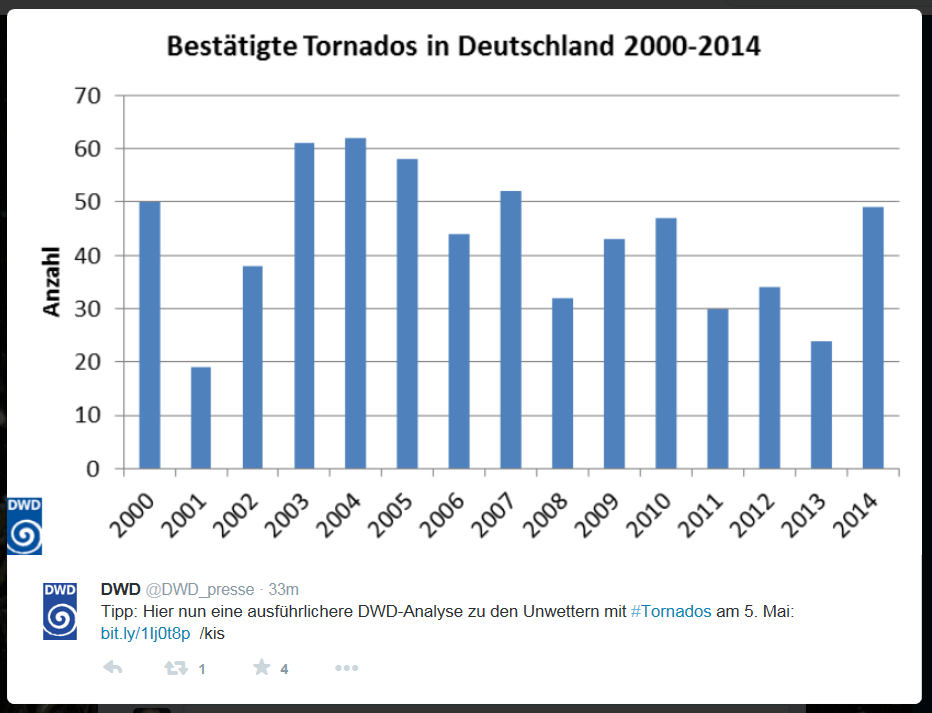 Number of confirmed tornadoes in Germany since 2000. Trend has been significantly downward over the past 10 years. Source: DWD.

In fact the trend appears to be more downward. Of course a period of 15 years is too short to draw sound conclusions, and the DWD adds that data has uncertainty. The bulletin adds:

In Germany the occurrences of tornadoes are often times not recorded, unless they cause direct or occur near a weather station. Over the years the wide use of mobile devices and i-phones have allowed the widespread recording and documentation of such events and so an estimation of their frequency can be done.”