In my last article, we discussed the Greenland ice core temperature record. In this article we will discuss the Greenland thermometer record. All the long record thermometer readings are from villages and stations on the coast. Some of these records go back to the early 1800’s, though GISTemp only posts records going back to 1880.

Here is plot of seven stations. Annual averages were downloaded from GISTemp and converted to annual anomalies using the 1951 to 1965 average for each as the baseline, the only years all seven stations had in common. 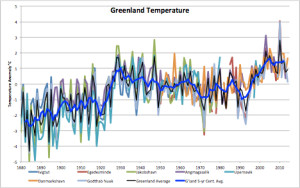 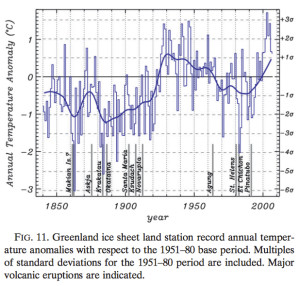 Jason Box’s paper shows that temperatures before 1880 were generally warmer than the decade after 1880, only about one to one and a half degrees colder than at present. The interesting thing is the step-change in temperature between 1920 and 1930. Greenland temperatures stepped upward by two degrees in this decade, the same step as in the 1990 to 2000 decade. But there was no rise in CO2 in those years. Both intervals are preceded by volcanic activity, as shown in Box’s figure 11. The volcanic activity is blamed for the cooling.

There are several logical twists and turns illustrated here. If volcanic eruptions are blamed for the cooling periods, especially in Greenland, with lack of eruptions blamed for warming, only some of the cooling dips are explained. The other cooling episodes are presumably because of ocean current/temperature cycles or the sun. This leaves only a single one decade warming period, from 1995 to 2005, that can possibly be blamed on CO2, though it still could be from those other reasons. That period is really a step at 1998 which we know was due to the El Niño of that year. This is pretty thin gruel on which to float climate calamity.